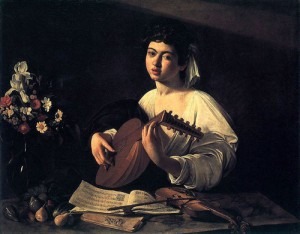 The Lute Player by Caravaggio

We also don’t know most of his poets, most of them being uncredited and unknown even in his lifetime. ‘Anonymous’ will be our poet of focus here!

Dowland was a lutenist, and recognized as one of the greatest of his day. From 1598 to 1606, Dowland served in Denmark at the court of Christian IV, being paid 500 dalers a year, making him one of the highest-paid at the Danish court.

Dowland’s First Book of Songs appeared in London in 1597 and is considered one of the most important, and influential, lute song publications. The first work to an anonymous text we will consider is the fifth song in the book: Can she excuse my wrongs? The poet makes a plea to his love: love me or my song is in vain, ‘must I praise the leaves where no fruit I find?’ Cease this torment and let me die contented.

Dowland: Can shee excuse (Emma Kirkby, soprano; Anthony Rooley, lute)
By the time of his Second Book of Songs (1600), John Dowland started to find the topic that he would become best known for: tears. In ‘Flow my Tears,’ we don’t know what has troubled Anonymous, but our singer is exiled, the nights are dark, there are only tears and sighs, and groans to fill his weary days. There’s no appeal here to a lost love, but a general despair at the world.

Dowland: Weep you no more, sad fountains (Frederick Urrey, tenor; Ronn McFarlane, lute)
All of this was building up to his great Lachrimae (Tears) collection of 1604. This was a set of seven pavanes for viol consort and lute, all based on the song ‘Flow my Tears.’ The pavane was a slow processional dance perfect for the court, because it enabled the couples to display their finery while processing around the room. The word comes variously from ‘in the style of those in Padua (a padovano) or from the phrase ‘en se pavenant’ (strutting like a peacock).

Of the nearly 70 songs written by Dowland, only a few have credited poets, and even those attributions are in doubt. We’ll stick with Anonymous and the tremendous skill s/he brought to his poetry. It may even be that Dowland is the poet of some of the text, but that falls into the problem of all the other things we don’t know about John Dowland!