“Listening to other musicians gives me a lot of inspiration” 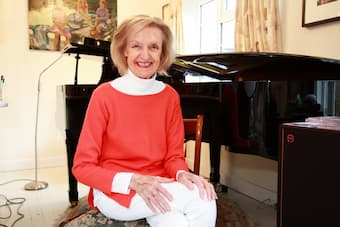 The album marks only the most recent chapter of Brenda’s rich musical history. Having been awarded the Gold Medal from the Associated Board for the highest marks in any Practical Subject throughout the British Isles, Northern Ireland, and Eire, Brenda has since gone on to perform with, amongst others, the London Symphony Orchestra, BBC Scottish Orchestra, Royal Philharmonic Orchestra, and across the US, Australia, the former Soviet Union, Hong Kong, and more.

Royalties from the new album will be donated to Shelter – the UK homeless charity. This act follows in the spirit of the Brenda’s previous charity work: in 1993, she established the John Ogdon Foundation – a foundation which completely funded three scholarships for gifted young musicians allowing them to pursue romantic and contemporary piano to a post-graduate level. The initiative was founded in honour of Brenda’s late husband, concert pianist John Ogdon who died in 1989.

In this interview, Brenda Lucas Ogdon talks about her influences and inspirations and the experience of travelling and performing with her husband when he was still alive.

Who or what inspired you to pursue a career in music?

I was inspired by the lovely, glamorous pianist Eileen Joyce. Not only by her amazing pianism but by her elegant changes of beautiful dresses during her recitals. I was also inspired by the recordings of the Beethoven Sonatas/Concerti by the great pianist Artur Schnabel.

What has been the greatest challenge of your career?

The sudden, unexpected death of my husband, John Ogdon. I was a widow at the age of 53 and my life was turned around. After performing the duo piano works with John for at least 12 years, I had to revive my solo career. It took some time but eventually it happened. 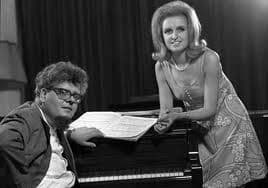 Of which performances/recordings are you most proud?

I am very proud of the send recording we made of the two Rachmaninoff Suites for 2 pianos. EMI amalgamated these with other recordings we made for them of Debussy, Bizet, Arensky, Khachaturian, Shostakovich, in a two-CD set, still available on the Warner label. I am also proud of my solo discs of The Well-Tempered Clavier Book 2 by J. S. Bach, released in 2018 on Sterling Records.

Which particular works do you think you perform best?

I really do not have a view on that question. At the moment I’m releasing a double album of Ravel’s piano music, ‘Ravel que J’Aime’, so I am hoping that it is Ravel.

I am always listening to other musicians which gives me a lot of inspiration. My daughter Annabel and I listen frequently to the Berlin Philharmonic Orchestra via their website.

I do not tour or give live concert performances anymore as I am 85 years old and those glory days are not possible for me physically. I have always loved recording so that is what I am happy to do now. The Ravel is for the UK homeless charity Shelter – I am donating all my royalties to this charity, which I feel passionate about.

What is your favourite concert venue and why?

The Wigmore Hall in London. It is just such a perfect recital hall.

What do you feel needs to be done to grow classical music audiences?

More funding for primary education in instrumental tuition in state schools. The rest will follow.

Difficult to pin down one experience against another: several memorable Promenade [Proms] concerts with John; a travel nightmare to give a concert in Spain when the French air traffic controllers were on strike so we missed the date. We eventually travelled and arrived in Malaga in the middle of the night. We played the concert a day late and when we walked on stage the audience erupted in the loudest applause I have ever heard! It was quite memorable and great fun.

As musician, what is your definition of success?

Success is when everything that you have worked and prepared for clicks into place at the right moment.

What advice would you give to young or aspiring musicians?

For performing musicians it is a tough world at the moment. Competition is strong and standards are very high – for example, the recent Leeds International Piano Competition where really amazing pianism was evident. Young musicians should listen to performances by major artists. They should try to accept the fact that there will be disappointments as well as triumphs in the life ahead of them and deal with that in a calm manner.

What is your most treasured possession?

Brenda Lucas Ogdon graduated with honours from the Royal Northern College of Music, where she met her future husband, John Ogdon. She embarked on a world-wide solo career and a piano duo partnership with John. This took them to almost anywhere in the world where grand pianos existed.

Brenda has appeared at major UK music festivals and played twice at the Proms, performed with Andre Previn and Sir Neville Mariner, and was honoured to be invited to play in Hong Kong and broadcast on RTHK in 1996 at the time of the hand-over of the colony to China.

In 1992 she released a solo piano CD on Gamut Classics of John’s compositions the piano music of John Ogdon. After Johns untimely death in 1989 she founded the John Ogdon foundation to assist young musicians. In 1997 she appeared at the R.F.H. in a gala to honour his 60th birthday anniversary and again in 1999 at the South Bank with three other international pianists on the 10th anniversary of Johns death.

Brenda has given public performances of the complete cycle of book I of the 48 Preludes and Fugues by J.S.Bach. In addition to performing, Brenda is a committed teacher and has enjoyed giving masterclasses.