The English rock band The Beatles, formed in Liverpool in 1960, is widely considered the most influential band of all time. Led by songwriters Lennon and McCartney, the band was part of 1960s counterculture and inspired an international fan frenzy called “Beatlemania.” They stormed the United States pop market in what was dubbed the “British Invasion” and enjoyed huge commercial success. The Beatles essentially wrote simple songs emerging from folklore roots. Although primarily rooted in contemporary rock ’n roll, they absorbed different influences and styles, “having been inspired by everything, from Negro blues to Magyar dances.” And as a scholar writes, “they borrowed here and there with unabashed enthusiasm and made it all their own.” And while they considered “Beethoven a con, just like we are now,” Paul McCartney once said “Bach was always one of our favorite composers.” 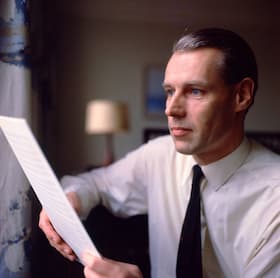 Paul and John sang in the church choirs of St. Peter and St. Barnabas in Liverpool, but none of the Beatles could read music. They certainly had no training in classical music and/or on an instrument. That particular aspect was introduced and fostered by their mentor and producer George Martin (1926-2016), a graduate of the Guildhall School of Music. Martin had studied composition, conducting and orchestration, music theory, harmony and counterpoint, and he usually arranged the songs of the band. 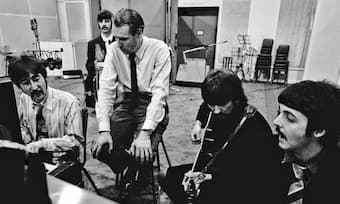 Martin strongly denied that he was the real creative genius behind the Beatles. On the contrary, he insisted, “I worked only to their original designs and to their specific requests, even to details of arrangements which they sang to me and which I often transcribed on the spot in the studio.” George Martin was recurrently called the “Fifth Beatle,” and classical influences in the band’s music should essentially be credited to him.

The Beatles: “In my life” 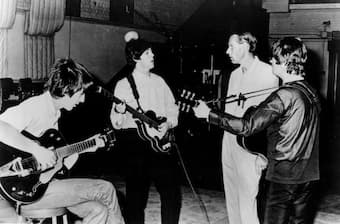 Beatles and George Martin in studio, 1966

Prior to working with The Beatles, Martin had worked at Parlophone, a branch of EMI, as a producer of classical and baroque records. Tellingly, he always called “classical music his first love.” Martin himself dabbled in composition, and he orchestrated a number of Bach works in the manner of Leopold Stokowski. In addition, he worked traces of Bach into several Beatles songs, and that included the megahit “Yesterday.” Paul McCartney wrote the melody and chord progression, but it was Martin’s idea to accompany the song with a string quartet. Sir Paul remembers, “that on that session George explained to me how Bach would have voiced it in a choral voicing or a quartet voicing. And he’d say, ‘This would be the way Bach would do it’.” 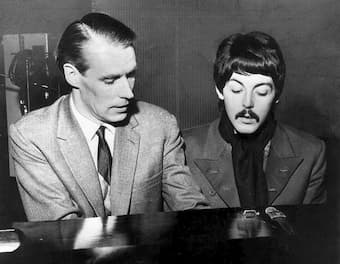 Paul also remembered “the original inspiration for “Blackbird” was from a well-known piece by Bach, which I never know the title of, which George and I had learned to play at early age…we felt that we had a lot in common with Bach. For some reason we thought his music was very similar to ours.” That particular famous Bach tune, transformed and transposted in “Blackbird,” turns out to be the “Bourrée” from the Lute Suite in E minor, BWV 996. 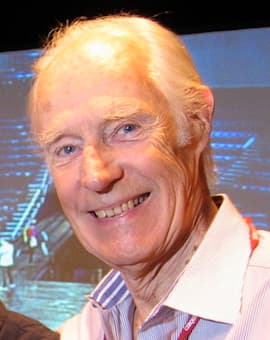 After Paul McCartney listened to Bach’s Brandenburg Concerto No. 2 on a television program, he had the idea of incorporating the high trumpet sound into one of his songs. “Penny Lane” is a nostalgic celebration of his childhood in Liverpool, and the second part of the song features a tune played by the piccolo trumpet. The song “All you Need is Love” sports a coda by George Martin. The band gave Martin permission to write whatever he wanted, telling him “Put together any tunes you fancy, and just play it out like that.” As such, Martin mingled together the melodies of “Greensleeves,” “In the Mood,” and Bach’s 2-part Invention No. 8 in F Major. A scholar writes, “despite the role of a favorite composer that Bach allegedly played for The Beatles, there are only a few concrete traces in their work, and most of them lead directly or indirectly back to the “Fifth Beatle” George Martin.

The Beatles: “All you need is love”