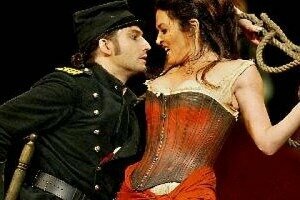 Georges Bizet’s opera Carmen was first produced at the Vienna Opera on 23 October 1875, with an extremely curious Johannes Brahms in the audience. Brahms had been aware of the scandalous Parisian premiere, summarized by a local critic. “Mr. Bizet as is known, belongs to that new sect that believes in vaporizing musical ideas instead of enclosing them within definite bounds. For this school of composition, of which Wagner is the high priest, motif is old-fashioned, melody is superannuated; the voice is overpowered by the orchestra, leaving only a feeble echo. Such a way of composing must inevitably produce works that are confused. It is melody that is the design of music. If one takes that away, only educated noise is left. Also, the role of Carmen is not a success for it is trivial and brutal, turning this feline girl into a cynical harlot.” Initially, Brahms disliked the work because it mixed tragic opera and light-hearted operetta, but soon he changed his opinion. Captivated by its wealth of melody, he developed a profound and passionate admiration for the work. In a letter to Elisabeth von Herzogenberg in December 1883, he called it “a very special favorite of mine.” Supposedly, he attended no fewer than 20 performances of that opera and declared that he would have been ready to go to the ends of the earth to meet the composer. He even gave the score as a present to many of his friends. All protestations and musicological explanations aside, the singular reason why this particular work should have enjoyed such favors with Brahms can be summarized in a single word; SEX! 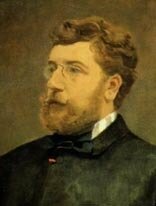 If his decade-long relationship with Clara Schumann is any indication, Johannes Brahms had always been attracted by strong, intelligent and beautiful women. And in the world of opera, face it, there is no stronger woman than Carmen. She is certainly the most intelligent person in the story, managing to free her husband from jail, and organizes all the business transactions of the band of smugglers. Carmen is smart, brave, resolute, independent, and exotic. But above all, Carmen is obsessed by her physicality, her body and its movements. Although she is a prostitute, she is primarily interested in having sex for the sake of physical closeness, and not for getting money. “The opera is so loaded with sexual imagery,” explains feminist musicologist Susan McClary, “it is not to be believed, as we see Carmen rolling up cigars on her bare thigh. And none of that kind of explicit sexuality had been on the operatic stage at all. And to have this woman who smokes and does exactly what she pleases just blew everybody’s mind.” According to McClary, “Carmen’s powerful sexuality engenders a sense of male inadequacy, and it is one of the reasons why the character has to be punished and killed at the end of the opera.” In other words, Carmen is a victim of male paranoia about female power, and the opera demands Carmen’s death as a means to reaffirm the male hegemony, which her transgressive sexuality has disturbed.

Brahms was, paradoxically, devoted to prostitutes. At age 13, he spent his evenings playing the piano in some waterfront establishment in Hamburg. Catering predominantly to sailors, these red-light locales combined the services of bar, restaurant, dance hall and brothel. Brahms talked about his youthful experiences with rage and anguish for the rest of his life, but above all, he considered himself a survivor. He also said that these experiences ruined women for him, and for the rest of his life he visited prostitutes for his sexual needs. To be sure, he fell in love with a number of exceptional women—most notably Clara Schumann, Agathe von Siebold and Marie Soldat—but love and sex simply did not mix. As such, Brahms seeing more than 20 performances of Carmen had preciously little to do with a reaffirmation of male hegemony or power, but everything with his obvious fascination of seeing professional sexuality—something he had become quite an expert in—publically staged in the temple to high art. To McClary, “Carmen lacks interiority and exists only through the cultural imagination of others.” For Brahms, I would suggest, Carmen was real enough!