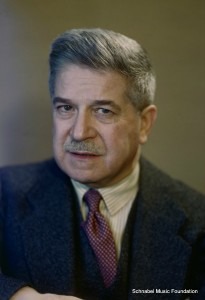 Austrian pianist Artur Schnabel (1882-1951) became so famous for his recording of the 32 Beethoven piano sonatas that critic Harold C. Schonberg always referred to him as ‘the man who invented Beethoven.’

His performances of both Beethoven and Schubert had the effect of refocusing attention of all of Beethoven’s piano sonatas, not just the well-known ones and his attention to Schubert brought back works that had been side-lined by the more famous works by the other Viennese masters, Mozart and Beethoven.

Schnabel’s parents moved to Vienna in 1884 and, in imitation of his older sister Clara, took up the piano at age 4. At age 9, he was studying with the great Theodor Leschetizky, who recognized in this child prodigy a musician, rather than just a pianist. It was Leschetizky who pointed the young Schnabel to the then-ignored piano works by Schubert.

His next teacher was Eusebius Mandyczewski., the assistant to Brahms, who taught him music theory and composition. This brought him into Brahms’ circle and brought him his official concert debut in Vienna in 1897 at age 15.

In this recording of the Beethoven ‘Hammerklavier,’ for example, we admire both his lightness of touch as well as his command of both sound and silence.

Beethoven: Piano Sonata No. 29 in B-Flat Major, Op. 106, “Hammerklavier”: I. Allegro (Artur Schnabel, piano)
In this Schubert recording, we can truly hear the delicacy that he brought to this movement.

Schubert: Piano Sonata No. 21 in B-Flat Major, D. 960, III. Scherzo: Allegro vivace con delicatezza (Artur Schnabel, piano)
Schnabel moved to Berlin in 1898 and began his international touring career. In addition, he formed chamber music groups and accompanied lieder singers, most notably Therese Behr, his future wife. From 1925 to 1933, he also taught at the Berlin State Academy. He left Germany in 1933 for England before moving to the US in 1939. His mother was killed at the Theresienstadt concentration camp in 1942 and Schnabel, though settling in Switzerland after the war, never returned to either Germany or Austria again.