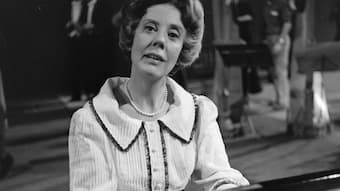 Following the line from Franz Liszt, through his pupil Emil von Sauer, French pianist Monique de La Bruchollerie (1915-1972) was one of the great pianists of her day, which ended far too quickly. Her family was one of musicians, with both François-Adrien Boieldieu (1775-1834) and André Messager (1853-1929) among her ancestors.

As a child, she came to the attention of pianist Isidor Philipp, who was a friend of her parents. Recognizing her talent, he started her piano training before she entered the Paris Conservatoire at age seven. She graduated 6 years later, age 13, having been awarded both the Premier Prix (1928) and the Prix Pagès (1933), which was awarded by Conservatoire authorities every five years to the best Premier Prix winner of the previous four years. The Prix Pagès concert included Beethoven‘s opus 111, Schumann‘s Carnival, Chopin’s 4th ballad and the Mazurka op. 50, Fauré’s Nocturne no. 7 and Islamey by Balakirev. She studied with Alfred Cortot in Paris, Emil von Sauer in Vienna and Raul Kochalski in Berlin.

In 1932, she made her professional debut in Paris at the Salle Pleyel, playing three piano concertos with the Société des Concerts du Conservatoire orchestra under the direction of Charles Munch. She participated in the 3rd Chopin Competition in 1937, taking 7th prize and becoming the first French awardee in the competition. 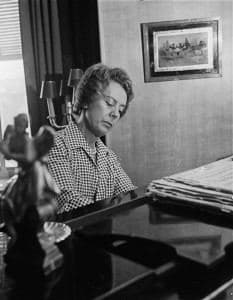 After WWII, her career became even more international, with appearances in the United States in the 1950s. Her US debut was in 1951 with the Boston Symphony Orchestra, performing Rachmaninoff’s Piano Concerto No. 3 with Ernst Ansermet conducting. It has been said that she was the first to perform this work outside the Soviet Union and her performance of this work has been described as having a ‘fire and an energy worthy of Horowitz.’

In 1952, with the New York Philharmonic, she performed French composer Jean Rivier’s Concerto No. 1 in C major for piano and orchestra, which she had earlier performed at the 1949 Edinburgh Festival and later in London with the BBC Symphony Orchestra under Albert Wolff. She later performed Tchaikovsky’s Piano Concerto No. 1 with the New York Philharmonic twice in 1953, first in a Stadium Concert under Pierre Monteux, then during the regular season under George Szell.

She was an equal with the other great pianists of the period, including Sviatoslav Richter, Wilhelm Kempff and Emil Gilels. Gilels, in particular, was a close friend.

Beyond the US, she appeared often in Poland, touring it at least 6 times between 1938 and 1958. Her repertoire extended from Bach to Shostakovich, and her reviews seem to universally praise both her musical sensibility and her musicality. Some of her greatest triumphs came during her tours of Germany and Eastern Europe.

Her international career came to an end in 1969 when, during a tour of Romania, La Bruchollerie was in a car accident that cost her the use of her left arm. Her concert career cut short, she became a teacher, and it was only three years later that yet another car accident took her life.

She is little remembered today, but during her life, she was considered one of the leading pianists of the French school and a powerful interpreter of a large range of music.