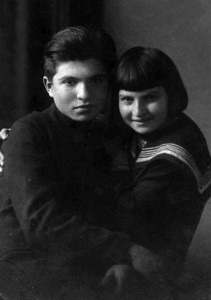 Emil Gilels and his sister Elizabeth

Russian pianist Emil Gilels (1916-1985) was famous for his perfect pitch. He started his piano lessons at age 5 and a half, soon graduating to Clementi and Mozart sonatinas. He was matched by his sister Elizabeth Gilels (1919-2008), who made her reputation as a violinist. She took third at the Ysaÿe competition in 1937 (David Oistrakh took first) and the following year, her brother took first in the piano competition.

Gilels trained with Yakov Tkach in Odessa, crediting him with the laying down the firm foundation in technique. Gilels’ first appearance on the concert stage was in 1929, when he was age 12. That same year he entered the Odessa Conservatory and studied with Bertha Reingbald, who he regarded as his true teacher.

After hearing him on the radio, Sergei Rachmaninov contacted Gilels, telling him that he regarded him as his pianistic successor. In terms of repertoire, Gilels spanned the centuries, performing Baroque and 20th century composers alike.

Listening to this live recording of a Bach prelude, we can hear how Gilels removes this from the strict performances that we are familiar with and makes it into a new kind of prelude.

Bach: Prelude and Fugue in B Minor, BWV 544: Prelude
(Emil Gilels, piano)
The energy and fire with which he attacks Stravinsky’s Russian Dance from Petrushka permits us to see the other side of this accomplished pianist.

Stravinsky: 3 Movements from Petrushka: No. 1. Danse russe (Emil Gilels, piano)
His performance of Liszt’s Piano Sonata in B minor is considered the gold standard of performance of the work.

Liszt: Piano Sonata in B Minor, S178/R21: III. Allegro energico (Emil Gilels, piano)
His technique, honed from his early lessons as a child, gave him an outstanding technical control and a polished tone. 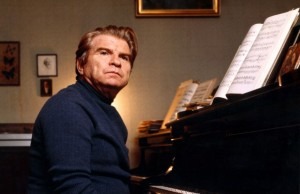 He was in the middle of recording the complete Beethoven piano sonatas for Deutsche Grammophon when he died during a medical check-up in Moscow.

Beethoven: Piano Sonata No. 29 in B-Flat Major, Op. 106, “Hammerklavier”: I. Allegro (Emil Gilels, piano)
His position in the music life of the Soviet Union was unmatched and he was one of the first performers permitted to travel outside the country, giving concerts in the US, UK, Austria, The Netherlands and other countries throughout Europe. Gilels’ legacy is all the more valuable to us not only for his definitive recordings but also for becoming an international master of the piano.