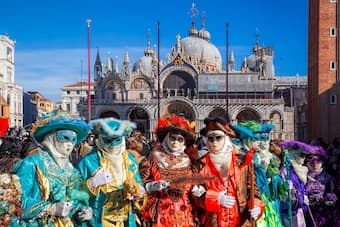 Carnival is the jolliest and most colourful time of the year; in a word, it’s non-stop party time. Christians around the world celebrate Easter, and the period of about six weeks that prepares the faithful for Easter Sunday is called Lent. Starting on Ash Wednesday, many Christians are committed to fasting and giving up certain luxuries. The period before Ash Wednesday is identified by various names like Shrovetide, Carnival, Fasching or Fat Tuesday depending on geographic and cultural locations and traditions. And it’s the time for parties, masquerades, parades, festive balls, and various other lavish and carefree entertainments. I just love wearing fancy costumes and masks, at least once a year. 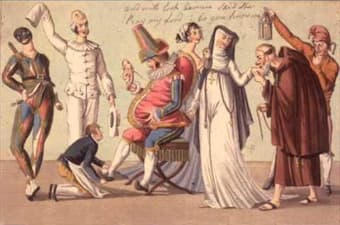 That period of heavy eating, drinking and fancy dress inspired many composers, and here is my personal list of the best classical music for carnival. At the top of the class must be Robert Schumann’s “Carnaval”—don’t worry about the spelling—when the composer presents 21 short pieces representing masked revelers at the time of carnival. We musically find Schumann and his friends and colleagues, including Chopin and Paganini. We also find the love of his life Clara Wieck and her nasty father, and in various ciphers characters from the Italian comedy, some former lovers and a marching musical army. Par none, this is surely one of the best classical songs depicting carnival, ever.

Aram Khachaturian got internationally famous with his exciting “Sabre Dance,” and maybe you have seen it staged? Khachaturian frequently combines the folk music of his native Armenia with the more formal aspects of the Russian musical tradition. “I grew up in an atmosphere rich in folk music,” explains Khachaturian, “popular festivities, rites, joyous and sad events in the life of the people always accompanied by music, the vivid tunes of Armenian, Azerbaijani and Georgian songs and dances performed by folk bards and musicians. These impressions shaped my musical consciousness and lay at the foundations of my artistic personality.” You can easily see why Khachaturian accepted a commission to write music for “Masquerade,” a theatrical play by the Russian poet and playwright Mikhail Lermontov. This story of deception isn’t particularly cheerful, but that’s not true of the music by Khachaturian. You can hear the masked revelers happily dancing a waltz, nocturne, mazurka, romance and a speedy gallop. Although the music is not really well known—for primarily political reasons—it is still one of my favorite dress-up music for carnival. 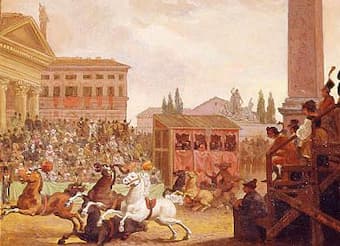 The city of Rome started carnival celebrations in the 10th century already. It actually lasted eight days, and ended on the night of Mardi Gras, the beginning of Lent. Initially, it consisted of games and tournaments, and later turned into a raucous street celebration. For this short period of time the strict laws governing public order could be broken, and people could make fun of the ruling classes, the clergy and the noble. People indulged in all kinds of excesses including food, wine, sex and violence. Fancy dress parades marched up and down the streets, with many popular costumes inspired by the Commedia dell’Arte. On each carnival day just before sunset, a specific horse race took place called the “Barbary Race.” It involved horses without a jokey running at full speed to the opposite end of the plaza. And in 1874, a horrible accident happened. A young boy crossed the street while the horses were racing, and he was trampled to death with the royal family watching. That was the end of the horse race, and also the end of the Roman Carnival. Hector Berlioz spent several years in Rome, and he must still have witnessed some of these crazy horse raced. His Le Carnaval romain is a scintillating and colorful overture describing these tumultuous celebrations; it is one of the best classical songs for carnival. 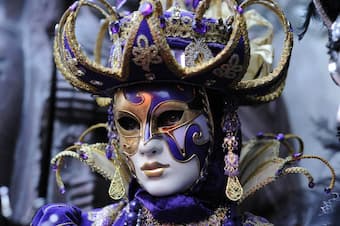 Talking about carnival celebrations in Italy. The city of Venice already celebrated carnival in 1094. But it really got going as a public festival in 1296, and it includes several weeks of public festivities and fun for the whole city. It seems that the entire population is engaged in dancing and partying, and work is definitely just another four- letter word. One can find public shows and exhibitions everywhere in the city, and lots of street artists like acrobats, jugglers, dancers and musicians. Private parties are frequently held in houses and cafés. Theaters host a number of masked plays and masked balls. By wearing the famous Venetian masks and costumes, it is possible for people to hide any differences of class and status, and they certainly still make fun of the aristocracy and clergy. This one communal outburst a year allowed the Republic of Venice to maintain order for the rest of the year. The carnival of Venice became internationally famous through the writings of Casanova in the 18th century, and this great party in Venice also inspired numerous composers and performers, including the violinist Heinrich Wilhelm Ernst. His musical take on the Venetian carnival is one of the best songs around. 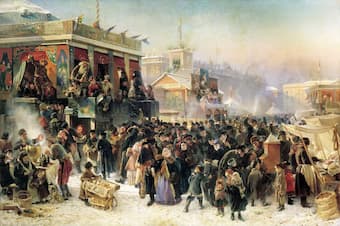 Antonin Dvořák was working on three concert overtures “to portray impressions of what a human soul might experience, in both positive and negative aspects.” Originally, the set was called “Nature, Life, and Love,” but the composer soon decided to publish each of them separately. So he gave them different names and opus numbers, “In Nature’s Realm” became Opus 91, “Carnival” was published as Opus 92, and “Othello” as Opus 93. The music for “Carnival” throws us directly into a boisterous and tumultuous carnival celebration. Hawkers and vendor are competing for attention, and boisterous and drunken crowds are caught up in the celebration. There are some gentle passages in the music, and Dvořák wrote that it represents “a pair of straying lovers.” Carnival and love have always been a popular pairing, and Dvořák’s music is amongst the best classical music for carnival.


Saint-Saëns: Carnival of the Animals

The celebration of carnival is not necessary limited to human activity. At least that’s what Camille Saint-Saëns thought during a summer holiday in the Austrian countryside. He imagined a work following a zoological program, and quickly wrote a musical suite of fourteen movements for chamber orchestra depicting a carnival parade of various animals. The composer thought that this Carnival of Animals would somehow harm his reputation as a serious composer. So he initially only allowed a single movement, “The Swan” to be published during his lifetime. For a performance of all animals we had to wait until long after the composer’s death in 1922. Ranging from the “Royal March of the Lions” to depictions of tortoises, kangaroos and even fossils, Saint-Saëns’ animal miniatures have become favorites with audiences worldwide. And it is certainly one of the best classical tracks for the celebratory season of carnival.

If you find yourself in the US State of Louisiana during Carnival season, the intoxicating celebration of “Mardi Gras” will sweep you off your feet, especially in the city of New Orleans. The origins of this celebration go back to medieval Europe, and the French House of the Bourbons brought the tradition to the colonies. Around the 1730s, Mardi Gras was already celebrated in New Orleans with elegant society balls. 100 years later, the first street processions were organized, and dazzling floats and masked revelers paraded through the streets. Private social clubs, then as now, sponsor these floats and they try to outdo each other in glitz and glamour every year. And there is much drinking and heavy partying around the old French quarters. The American composer and pianist Ferde Grofé is best known for his 1931 five-movement tone poem, “Grand Canyon Suite.” Five years earlier, he composed a dedicated river journey, “The Mississippi Suite.” This orchestral suite in four movements musically describes scenes along the Mississippi river from the springs in Minnesota to New Orleans. The final fun movement “Mardi Gras” emerges us in a boisterous celebration of Mardi Gras in New Orleans along Bourbon Street.


Bonfá: Morning of the Carnival 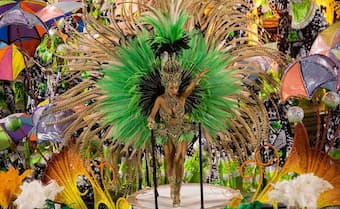 If you are looking for major excitement during Carnival season, maybe you should travel to Rio de Janeiro in Brazil. Some people suggest that almost two million people per day celebrate on the streets during this event. It was first held in the city in 1723, and it all happens during the five days before Ash Wednesday. “At the heart of the Carnival is the samba, which is the perfect illustration of the Afro-European blend that defines Brazil culture.” A typical carnival parade features the most elaborate and colorful floats and costumes fashioned by numerous samba schools. Over time, the number of samba schools has increased significantly, and the parades have gotten longer and longer. In 1984 it was decided to separate the parade into two dates and categories. And there is a panel of 40 judges who evaluate every movement, every costume and every song. Once it is all said and done, this joyous competition announces a champion, or rarely, a “super-champion” on Ash Wednesday. The carnival in Rio is all about the exotic, erotic and sensuality of the samba, and this is reflected in lots of flashy and showy costumes. Sadly, I have never been to the Rio Carnival, but the Brazilian composer Luiz Bonfá provides us with a great musical anticipation of this super exciting event.

Robert Schumann just loved to include secret messages and ciphers into his music. It’s like a musical cryptogram, with the actual meaning hiding behind a mask of sound. Maybe it’s one of the reasons why Schumann was fascinated by carnival as well. In 1838, Schumann visited the city of Vienna. On one hand, he was trying to escape the Leipzig piano teacher Friedrich Wieck, who had taken him to court in order to prevent him from marrying his daughter Clara. On the other hand, Schumann was desperately trying to find a Viennese publishing house for his musical journal. Sadly, he was not able to find the professional opportunities he was looking for, but he did find a completely unknown symphony by Franz Schubert. And he also composed his Carnival Jest from Vienna. The original German title “Faschingsschwank” contains the letters ASCH SCHA, and scholars have noted “Schumann uses these notes in sequence as melodic material for the work.” ASCH is the German word for “Ash,” as in Ash Wednesday, the first day of Lent. “Asch” is also the name of the bohemian hometown of his former lover Ernestine, so how many meanings are actually hidden behind the musical mask of Schumann? Nobody knows, but it is one of my all-time favorite songs for Carnival. There are literally hundreds of other possible songs describing this jolliest time of year, and now you know some of my favorites; what is yours?