For a variety of extra-musical reasons, Camille Saint-Saëns has never been taken seriously as one of the great French composers of the late 19th-century. Historically informed, widely read in the French classics, religion, Latin, Greek, and acquiring a taste for mathematics and the natural sciences, including astronomy, archaeology and philosophy, he was tolerant of a wide range of musical issues and directions. However, his views on expression and passion in art conflicted with the prevailing Romantic aesthetic. In his memoirs he wrote, “Music is something besides a source of sensuous pleasure and keen emotion, and this resource, precious as it is, is only a chance corner in the wide realm of musical art. He who does not get absolute pleasure from a simple series of well-constructed chords, beautiful only in their arrangement, is not really fond of music.” 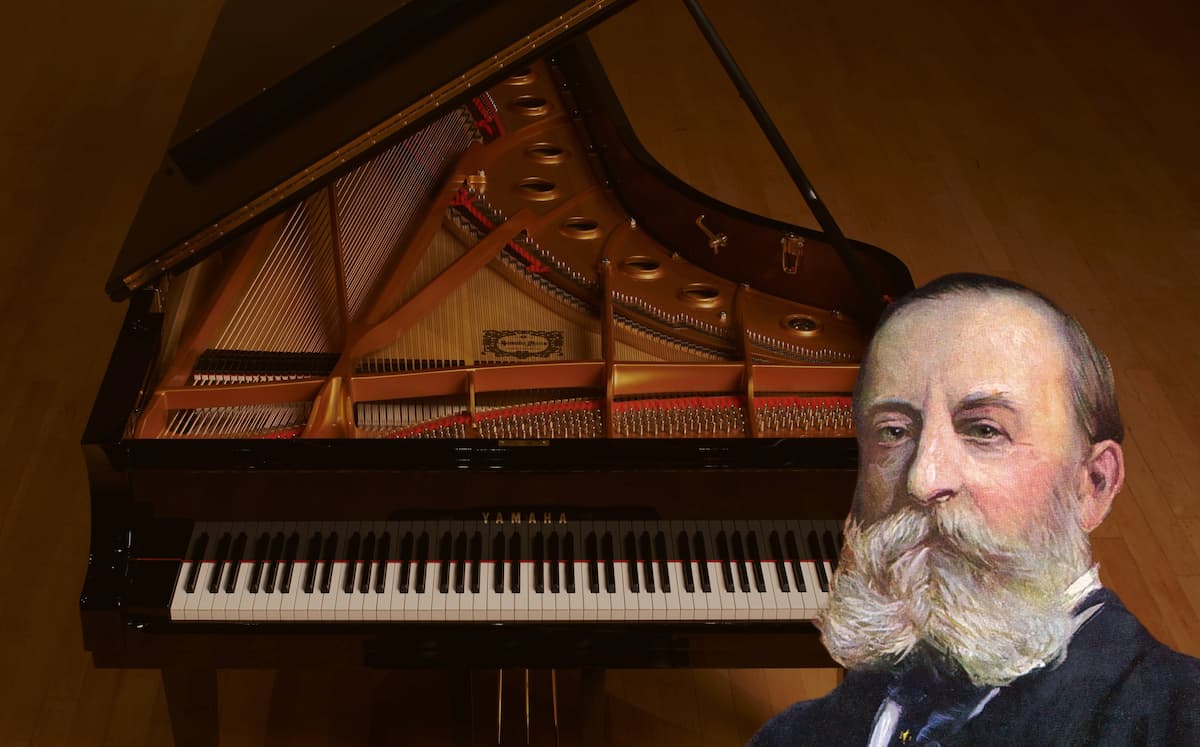 Saint-Saëns was one, if not the greatest of all music prodigies! He produced his first composition at age 3, and publicly performed a Beethoven violin sonata at age 4. In a legendary concert at the Salle Pleyel, and at the tender age of 10, he offered to play as an encore any of Beethoven’s 32 piano sonatas from memory! Hector Berlioz famously said of him, “He knows everything but lacks inexperience.” Saint-Saëns was a piano virtuoso of the highest caliber, and he transferred his bravura brilliance as a performer into a substantial number of works for that instrument. However, his steadfast dedication to musical moderation, logic, clarity, balance and precision deservedly earned him the nickname “the French Beethoven.” Or as we might deduce from the masterly and complex character studies of his Six Fugues, Op. 161, he might as easily have been called “the French Mendelssohn.”

Camille Saint-Saëns at the piano, 1916

Saint-Saëns was widely acknowledged as an extremely good composer, but it was frequently implied that his beautifully crafted music was nevertheless missing something. And for many years he was polemically called “The greatest composer without talent.” Although his music was often performed and almost always well received in France and abroad, it was never really loved and, with the exception of the famous Carnaval des Animaux, the Third Symphony, the Danse Macabre, a couple of Piano Concertos and his opera Samson et Dalila, is seldom performed today. And his compositions for piano solo are often small-scale and designated for the music salon. A number of his mazurkas, album-leaves, souvenirs and waltzes were published as stand-alone pieces or part of larger “Album Collections.” Despite the apparent lightness of these pieces, Saint-Saëns was too talented a musician to compose carelessly, and as elsewhere, his talent for writing beautiful and suggestive melodies is immediately apparent.


Saint-Saëns was certainly an excellent craftsman with a fine sense of musical style. And although he was considered old-fashioned in his late life, he explored many new forms and reinvigorated some older ones. Among them was the revival of the piano suite, a genre that sprung back to life during celebrations of the centenary of Rameau‘s death in the composer’s hometown of Dijon. Saint-Saëns, who was one of the featured attractions of that festival, devoted an entire concert program to the composer, and he later edited the first volume of the complete Rameau edition. In his own suite compositions, the piano writing becomes more linear and less heavy, and the venerated genre is projected through a 19th century harmonic lens. Deeply inspired by French classicism, Saint-Saëns compositional approach made him an important forerunner of the neoclassicism practices of Ravel and others.