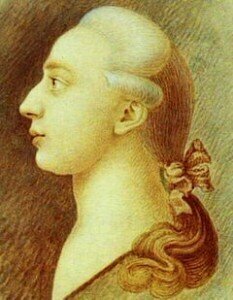 Giacomo Casanova (1725-1798) is still known to this day for his ‘complicated and elaborate affairs with women’ – not bad for someone nearly 300 years old. He ran in the highest social circles in Europe, and in addition to the royalty he knew, he also knew artists such as Voltaire, Goethe, and Mozart. He ended his life as a librarian in the household of Count Joseph Karl von Waldstein (a relative was a patron of Beethoven) where he wrote Histoire de ma vie (Story of my Life). It is on this biography, which was at first thought to be fiction, that his fame rests. For historians, his biography has turned out to be one of the truest sources for the detail of 18th century social life. For everyone else, it’s a salacious tale of women, women, women, and hurried escapes. Lovers, ménage à trois, young girls who have only just left the convent – the stories entranced millions. That they were true wasn’t really important. That they were stories was the more important part.

We can start, of course, with Mozart. His Don Giovanni bears no small resemblance to Mozart’s friend Casanova and we have Don Giovanni’s right-hand man Leporello to give us the place and number of his conquests (Italy, 640; France 100; Turkey, 91, Spain: 1,003 and counting). There are notes to indicate that Casanova discussed the plot with Lorenzo da Ponte while he was writing the libretto for Mozart. Who better to advocate for the licentious than the master of it?

In modern times, we have Johan de Meij’s Casanova from 2000. Through 8 musical scenes, we have some of the most important episodes of Casanova’s life: his arrest, his captivity, and his escape from prison in Venice. Contemporary Dutch composer Meij took his inspiration from the idea that Casanova would have been Puccini’s best topic, as Casanova’s life is full of love, passion, intrigue, and treason, or, in other words, all the same themes that Puccini took on in his operas. Here, Meij uses the cello to describe Casanova’s ardent and seducing voice.

The Polish composer Ludomir Różycki (1883-1953) also wrote an opera, Casanova, of which the third act Waltz is the most famous part.

In the 1949 film noir The Third Man, which is more celebrated for Anton Karas’ zither melodies, it is in the Casanova Night Club that we have Hubert Clifford’s music.

Clifford: The Third Man: The Casanova Melody (BBC Philharmonic Orchestra; Martyn Brabbins, cond.)
In 1976, for Fellini’s Casanova, film composer Nina Rota wrote music and the suite that was made from the music opens with a pensive look back on a life misspent.

Rota: Fellini’s Casanova Suite: I. O Venezia, Venaga, Venusia (Michaelangelo Carbonana, piano)
Even Johann Strauss II got into the Casanova story. Not intentionally, but his music was used by Ralph Benatzky for a short operetta in 1928 entitled Casanova.

Composer Claudio Ambrosini took the idea of a lost notebook of Casanova for a set of nocturnes. The mixture of regular piano playing and direct playing on the strings makes for an unusual meditation.

Ambrosini: Le cahier perdu de Casanova : Notturno blu (Aldo Orvieto, piano)
In music, it would appear that the great lover Casanova made his best appearance in the music and stories of those who knew him best. The others can only look on in imitation.