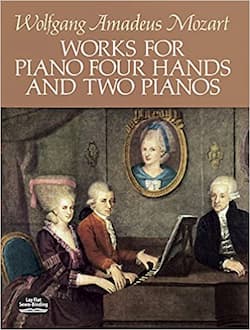 Performance by two piano players simultaneously sharing a single piano requires not only a level of intimacy unique to chamber music, it also presents its own set of technical challenges. Despite a number of notable exceptions, the piano four hands repertoire is primarily associated with domestic music making. On the other hand, the piano duo—designating performance by two piano players on two instruments—surged onto the concert stage at the turn of the 20th century and spawned a highly diverse and fascinating repertoire. So we decided to put together a little musical survey of these popular genres that reflect the intimacy of the salon, or alternately presents hair-raising pianistic pyrotechnics on the concert stage! And if you ask me personally, there is no better way to start this series than with a Sonata for Two Pianos by Wolfgang Amadeus Mozart. Mozart wrote the D-major work in 1781 for a performance with fellow pianist Josepha Auernhammer. 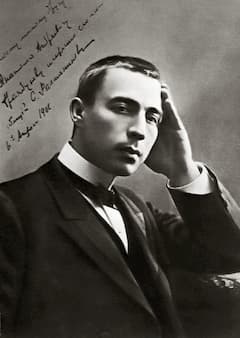 Increasing political unrest in Russia forced Sergei Rachmaninoff (1873-1943) to resign his duties as conductor at Moscow’s Bolshoi Opera in February 1906. Almost immediately he departed for Italy and took lodgings near the town of Pisa. According to popular lore, Rachmaninoff was taking a walk with his daughter when they changed upon an organ grinder. Fascinated by the freshness and vitality of the melody, Rachmaninoff wrote down the tune as soon as he had returned to his hotel. It eventually grew into his “Polka Italienne,” originally conceived for two piano players/piano four hands. This sparkling and delicious tribute to Italy offers moments of genuine charm and flashes of pure virtuosity. Carefree and masterly in its piano writing, this musical jewel carries none of the political or personal worries experienced by the composer at the time. 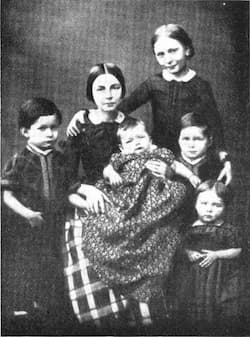 Clara Schumann with the children

Robert Schumann (1810-1856) was a devoted father. He played games with his seven children, read to them, and took walks with them. He even kept a diary for them to record special events, like the discovery of a bird’s nest. And it goes without saying that his music was affected by his love for his children. He wrote a number of imaginative and entertaining works inspired by the activities of his children or works for children in general. One only has to think of his Album for the Young Op. 68 or the Scenes from Childhood Op. 15. And in 1848 Schumann wrote a set of pieces entitled “12 Vierhändige Klavierstücke für Kleine und Grosse Kinder” (12 Four-Hand Piano Pieces for Small and Large Children). The opening “Geburtstagsmarsch” (Birthay March) was performed by Schumann and his daughter Maria as a surprise for Clara Schumann’s birthday on 13 September 1848. Schumann completed this delightful set during September and October of 1848 and published it as Op. 85. 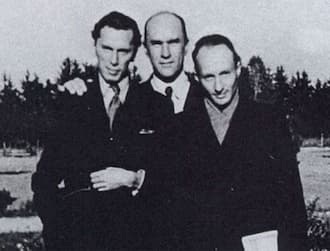 During the oppressive wartime occupation of Poland, Witold Lutosławski’s (1913-1994) made his living by playing piano in coffee shops around town. Together with his friend and fellow composer Andrzej Panufnik, he founded a piano duo, and they prepared a repertoire of nearly 200 pieces. These included arrangements of music ranging from Bach to Brahms, and from Stravinsky to Debussy. It also included a dazzling set of variations based on the Caprice No. 24 by Paganini. Lutosławski essentially retained the structure of the original work while adding novel harmonic interpretations and pianistic fireworks. “Music,” according to Lutosławski “can say things which are incapable of being expressed by any other means.” It is worth noting that from the entire collection of arrangements performed by the duo only this single set of Variations escaped destruction in the Warsaw Uprising.