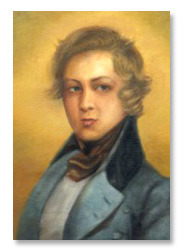 Robert and Clara Schumann had eight children, all born between 1841 and 1854. With his family of little musicians steadily growing, Robert compiled a short album of “Little Piano Pieces” for the 7th birthday of his daughter Marie. And once he had started, new ideas for miniatures came inevitably to his mind. Clara wrote in her diary, “The pieces usually given to children at their piano lessons are so bad, that it has occurred to Robert to bring out a collection of such little works himself.” Determined as always, Schumann finished the 43 pieces of his Album for the Young in barely 2 weeks. “I cannot remember ever feeling as content as when working on these pieces,” Schumann wrote to his friend Carl Reinecke, “I felt as though I was starting to compose all over again!”

Robert Schumann: “Sylvesterlied” (New Year’s Song), Album for the Young Op. 68, No. 43
Contrary to the Kinderszenen Op. 15, which Schumann intended as a grown-up’s memories of childhood for grown-ups, the Album for the Young looks “forward, with eager anticipation, to what is to come for the young.” Schumann subdivided the set up to No. 18 as suitable for “younger players,” and starting with No. 19 as appropriate “for more mature players.” A good many more miniatures have surfaced in various Schumann manuscripts, but were not included in the version edited by Clara Schumann. Schumann tellingly wrote, “Never play bad compositions, nor even listen to them, unless absolutely obliged to do so.” Goodness me, that’s probably the best advice I have heard in years! To follow Schumann’s lead, there is no better way to open up new, wonderful and exciting vistas of good compositions to come in 2016 than with the poetic and symbolic “New Year’s Song!”