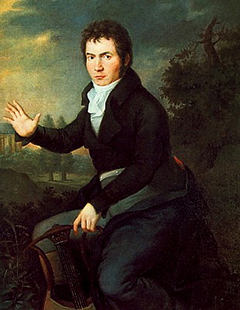 Portrait of Beethoven in 1804, towards the
beginning of his middle period. © Wikipedia

My first encounter with Beethoven was through the Associated Board of the Royal Schools of Music aural tests back when I was a little kid. One part of the test was to clap the rhythm of a short excerpt and to state the metre. I remember being trumped by the opening of the finale of Beethoven’s First Piano concerto, Op.15. With a lack of stress on the first beat, I thought the first note was the beginning of the bar, but then within a few bars got horrendously confused.1 That started my fascination with the composer, but of course I realised later that this mischievous rhythmic ambiguity was only one manifestation of Beethoven’s genius. Another piece that I came across a few years later, also featuring this witty gesture, is the Piano Sonata in G major, Op.14/2. The first movement deliberately avoids putting the stress on the first beat of the bar in the opening, whereas the third movement opens with musical snippets that sound like hemiolas. 2


Having learnt about Beethoven’s three periods whilst preparing for GCSE music, I set off on a journey getting to know some of his middle-period sonatas, namely Op.31/2 (‘Tempest’), Op.31/3 and Op.53 (‘Waldstein’). Some scholars have also named this period – roughly works composed between 1802 and 1812 – his ‘heroic’ period, since the works from this period display a new style and are of a grander scale, and a few of them use the majestic key of E-flat major, such as the aforementioned Piano Sonata Op.31/3, his Third Symphony (‘Eroica’), and Fifth Piano Concerto (‘Emperor’). It was the richer harmonies, and the expressive yet sensitive qualities – effectively the constant musical dichotomy between struggle and triumph – that drew me to these middle-period compositions. This musical style was no doubt influenced by the problems Beethoven was facing at the time: he had no luck with his love interests and was also suffering from ill health. 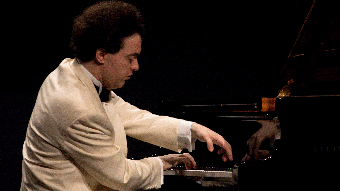 Speaking of emotions, one of Beethoven’s works was said to be inspired by a real-life event. I remember hearing Evgeny Kissin play the ‘Rondo alla ingharese quasi un capriccio’ in G major, Op. 129, as an encore, and it was electrifying! Despite the opus number, it was apparently written between 1795-98, but left unfinished and unpublished by Beethoven, only to be published in 1828 by Anton Diabelli. The piece has the subtitle ‘Rage Over a Lost Penny, Vented in a Caprice’ on the manuscript but it was thought to be coined by Beethoven’s friend Anton Schindler and not the composer himself. It is a most delightful piece, cast in a pleasantly hurried and frustrated manner – exactly how I feel when I am struggling to rush out of the door with a toddler and a baby!

My favourite piano sonata has to be his Op.110. The first movement, marked Moderato cantabile molto espressivo (at a moderate speed, in a singing style, very expressive) and con amabilità (amiably), opens with an extremely lyrical and sensitive melody, which is quite simply constructed by rising fourths and falling thirds. This comes back as the fugue subject in the last movement, though it is now transformed rhythmically. There is a childlike gentleness and innocence in the first movement, but at the same time it is full of energy and spirit. The second movement, a Scherzo and Trio, is more assured and conveys a sense of humour – to the point that it is almost flirtatious – amongst abrupt outbursts. The finale presents two arioso sections alternating with two fugal sections. For me, this sonata seems to take us on a journey through life. The first movement juxtaposes the lyrical melody with arabesques all over the keyboard, as if it were a baby experiencing the sights, sounds, and textures of the world. The second movement symbolises a teenager: the music is bold and tempestuous whilst also being mischievous. The music reaches adulthood in the finale: the arioso sections are both reflective, as if pondering over the meaning of life, and dreamy, which contrast with the fugues that sound pragmatic and almost stoic. Finally, Beethoven greets us with a warm embrace in the coda of this last movement, as if conveying that no matter what, life should be celebrated.


1 The first note is in fact an anacrusis.

2 Hemiola – a musical fragment that is grouped into three sets of two beats instead of two sets of three beats, thus creating the effect of duple time replacing triple time.