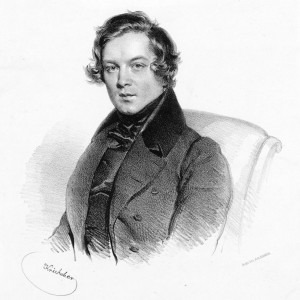 Written about children, but not written for children, the collection of short piano pieces entitled Kinderszenen (Scenes from Childhood) by Robert Schumann was a gift to Clara Wieck in 1838, two years before they were finally married. The final 13 pieces were chosen from a set of 30 pieces, the remaining 18 published later in Op. 99 and Op. 124.

Originally, Kinderszenen, Op. 15 was to be published together with the 8 Noveletten, Op. 21, as a work called Kindergeschichten (Children’s Tales) but Schmann changed his mind and separated them. In a 1838 letter to Clara when he sent her the pieces, Robert wrote that they were an answer to her comment ‘that sometimes I seemed to you like a child….’ He told her to laugh at the titles but to take their performance seriously: ‘They will amuse you, but you will have to forget yourself as a virtuoso.’ 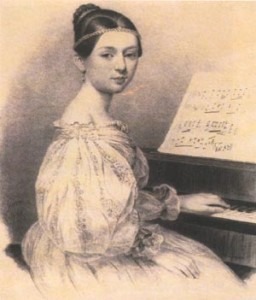 Clara Wieck at the paino

The titles take us to the land of children:

No. 1. Von fremden Landern und Menschen (Of Foreign Lands and People)
No. 2. Curiose Geschichte (A Strange Story)
No. 3. Hasche-Mann (Catch-as-catch-can)
No. 4. Bittendes Kind (Pleading Child)
No. 5. Glückes genug (Happy Enough)
No. 6. Wichtige Begebenheit (An Important Event)
No. 7. Träumerei (Dreaming)
No. 8. Am Camin (By the Fire-side)
No. 9. Ritter vom Steckenpferd (Knight of the Hobby-horse)
No. 10. Fast zu ernst (Almost Too Serious)
No. 11. Furchtenmachen (Frightening)
No. 12. Kind im Einschlummern (Child Falling Asleep)
No. 13. Der Dichter spricht (The Poet Speaks)

But this is a land as observed by an adult and observed from a distance. The opening piece, Of Foreign Lands and People, serves as the key to the work, with its opening theme appearing in various guises throughout the other pieces.

Schumann: Kinderszenen: No. 1. Of Foreign Lands and People (Martha Argerich, piano)
If we listen to the same piece in other hands, we can hear how much interpretation can change the work.

Schumann: Kinderszenen: No. 1. Of Foreign Lands and People (Alfred Brendel, piano)
Brendel’s vision seems much more dutiful than the world of the imagination summoned by Argerich.

The best known of the 13 pieces is the middle one: No. 7, Traumerei (Dreaming). Every child who learns to play it thinks he’s gotten a vision into the world of Schumann, but in the hands of a virtuoso, the role of rubato (a slight speeding up and slowing down of the tempo) gives us a much more dreamlike quality to the work.

Schumann: Kinderszenen: No. 7. Dreaming (Martha Argerich, piano)
Overally, the pieces are not technically demanding, but it is the quality of expression and the sensitivity of the performer to that expression that is key. It is important to remember that the titles are not the story, but only an indication meant to guide the performer. When we look at the final piece, No. 13, The Poet Speaks, we can finally see that these Scenes from Childhood are not scenes as seen by a child, but scenes as remembered by ‘The Poet,’ and therein lies the difference.