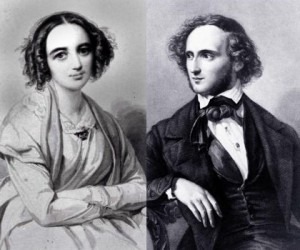 Of this fair river; thou my dearest Friend,
My dear, dear Friend; and in thy voice I catch
The language of my former heart, and read
My former pleasures in the shooting lights
Of thy wild eyes…
My dear, dear Sister!

Dorothy was a highly talented author, poet and diarist in her own right, but she had limited ambitions to become an author. As such, her writings consist of a series of letters, diary entries, poems and short stories. However, as you can read in his poetry, she became one of his most important muses. In the event, brother and sister became inseparable companions, and even after William married Mary Hutchinson in 1802, Dorothy continued to live with them. Interestingly, the Wordsworth siblings seem to have had an exact replica in the musical world! Inexorably drawn together by their common extraordinary talents and profound love for music, Felix Mendelssohn and his older sister Fanny developed a close relationship that endured throughout their lives. In fact, Felix would regularly submit his compositions to his big sister, and taking her critical advice to heart, never hesitated in modifying or deleting material that she found questionable. It’s not surprising that Felix referred to Fanny as “Minerva,” liking her to the Roman goddess of wisdom.

Fanny was four years older than Felix, and she developed a protective and almost motherly attitude towards him in their early years. Both were musically precocious, and Fanny memorized 24 preludes from the WTC in less than a week by age 13. Without doubt, Fanny’s virtuosity on the piano equaled, if not surpassed, that of her brother Felix. Both started composing at an early age, and music took a central stage in the Mendelssohn household. In all, Fanny wrote well over four hundred pieces, with few of her compositions published and many more unavailable or destroyed. According to a contemporary critic, “Felix wrote technically superior compositions, but Fanny’s expressiveness was unmatched.” Yet, Fanny’s musical aspirations were quickly dashed by societal constraints. A letter from 1820, written by her father Abraham reads, “While music will perhaps become Felix’s profession, for you it can and must only be an ornament, never the basis of your being and doing.” When Fanny fell in love and married the court painter Wilhelm Hensel in 1829, she eventually settled into a prescribed domestic role.

In hundreds of letters, she became her brother’s muse and chief critic, discussing new pieces and providing lengthy assessments of major works. These letters not only chronicle the diverse phases of their adult years, but also disclose a relationship of far-reaching personal and musical consequences. Fanny’s last letter to Felix honors his birthday in February 1847. Only three months later she suddenly collapsed and died the victim of a stroke at age 41. In an unpublished letter to his sister Rebecka, merely five day’s after Fanny’s death, Felix writes, “God help us all—I don’t know what else to say and think…God help us, God help us!… The only thing that helps a little is to cry a lot—if only one could do that all the time. Alas, dear sister, I can’t write or think about anything except Fanny. It will never be otherwise as long as we’re here on earth.” To cope with the death of his sister, Mendelssohn composed his String Quartet in F minor. Aggressive tremolos and forceful accents voice his emotional despair, with the mournful “Adagio” presenting a musical elegy seeking inner solace. Felix outlived Fanny by a mere six months as he died on 4 November 1847 from a ruptured blood vessel. He was only 38.