A peaceful ostinato figure, grounded and tranquil, opens the work. After a few bars, a serenely beautiful yet simple melody is heard in the treble which melts into a series of increasingly complex variations, the initial theme dissolving into trills and grace notes, gossamer fiorituras and filigree passages. The curve of complexity turns full circle when the theme returns in its original form at the end.

This could quite easily be a description of Chopin’s lullaby, the Berceuse, Op 57, composed in 1845, but in fact the work in question was recorded some 100 years later for the jazz album ‘Everybody Digs Bill Evans’.

Bill Evans’ ‘Peace Piece’ came out of Leonard Bernstein’s ‘Some Other Time’ (from On The Town). Evans borrowed the ostinato bass figure and improvised an increasingly decorative treble line over the top of two chords which remain the same throughout, just as in Chopin’s Berceuse.

“What happened was that I started to play the introduction, and it started to get some much of its own feeling and identity that I just figured, well, I’ll keep going”
– Bill Evans

While Chopin’s Berceuse, with its sense of freely evolving improvisation and fresh decorative ideas, is the most obvious model for ‘Peace Piece’, the work is also redolent of Satie’s Trois Gymnopédies (that repeating bass figure again) and the slow movement of Ravel’s G major Piano Concerto. The trills and bi-tonal figurations in ‘Peace Piece’ are also reminiscent of birdsong; Messiaen’s Catalogue d’Oiseaux was just appearing, but whether Evans actually knew this music is not known. 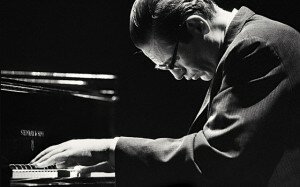 Evans, a jazz pianist by profession, was classically-trained at Southeastern University and Mannes School of Music, and his fondness for and mastery of classical repertoire (including Bach, Chopin, Scriabin, Rachmaninoff, Ravel and Debussy) gave him extraordinary expressive freedom and inspired some of his greatest jazz innovations.

“Everything I’ve learned, I’ve learned with feeling being the generating force.”
– Bill Evans

Bill Evans: Peace Piece (Igor Levit)
‘Peace Piece’ has a wonderful sense of static, meditative calm, and in both ‘Peace Piece’ and Chopin’s Berceuse, the ostinato serves as a unifying, grounding element from which ideas flower and evolve over an extended narrative arc, while the reprise of the opening melody creates a sense of departure and return. Evans’ music, like that of Chopin, and also Scriabin, Debussy and Ravel, combines economy of musical statement with highly original melodic and harmonic concepts (in ‘Peace Piece’, bars 47-49, for example, Evans uses a free tonal approach reminiscent of Prokofiev). He used oblique harmonies based on whole-tone scales, and abandoned functional or structural harmony, so that chords are specifically used for colour and timbre rather than strict harmonic progression. There is an introspective lyricism and intimacy in both his sensitive piano playing and his compositions which defies categorisation, proof that in great music creative influences transcend time and style.

Evans refused to play ‘Peace Piece’ live, insisting it was the result of a unique moment in the recording studio, a moment which could not be recreated in concert (though he did eventually perform it just once, two years before he died).

Many classical pianists admire Bill Evans and his influence is still felt nearly 40 years since his death: the French pianist Jean-Yves Thibaudet pays tribute to Evans’ genius in his ‘Conversations With Bill Evans’ album, and Russian pianist Igor Levit uses ‘Peace Piece’ as a fittingly consoling conclusion to his album ‘Life’. The British composer Gavin Bryars wrote ‘My First Homage’ (1978) as a homage to Bill Evans.

The score of ‘Peace Piece’ is published as a “written out improvisation”, offering the pianist the opportunity to either play it verbatim or to explore their own improvisations.