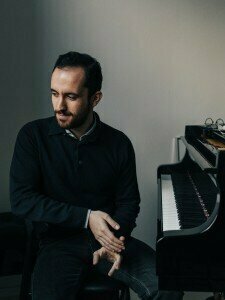 The German-Russian pianist Igor Levit has plenty to say – at the piano and via his social media network and interviews in which his forthright views, musical and political, are often given voice. His choice of repertoire, and his performances of it, are concentrated, intense and uncompromising. He has a penchant for big, serious works – Beethoven’s late piano sonatas, Bach’s Goldberg Variations (bold choices for a young artist), and works by Frederick Rzewski, including his The People United Will Never Be Defeated. His view is that one should play these great works, regardless of one’s age, because they were “written to be played”.

Bach: Goldberg Variations, BWV 988 – Aria
With four recordings already and glowing reviews wherever he plays, his latest release, ‘Life’ has been eagerly awaited. It’s very different from his previous recordings and is, in effect, a classical “concept album” – a very personal existential reflection on life and death, prompted by the death of a close friend. Music has proven therapeutic benefits and Levit finds a way through his grief, though perhaps not a sense of closure, in a series of solemn, valedictory and deeply thoughtful works by Busoni, Bach/Brahms, Schumann, Rzewski, Wagner/Liszt and Bill Evans. There’s no flashiness here, no glittering runs or vertiginous virtuosity – that would be inappropriate. Instead we have a continuous meditative flow of music from Busoni’s Fantasie after J S Bach through the fleeting poignancy of Schumann’s Geister (‘Ghost’) Variations to Bill Evans’ Peace Piece, an unusual but entirely fitting work with which to close this wondrous recording.

Every note is considered, measured, poised but never mannered. Levit’s playing epitomises the maxim “through discipline comes freedom” (something I felt very strongly in Levit’s mesmerising concert of Beethoven’s last three sonatas in London in 2017). You could have cut the atmosphere – one of concentrated collective listening – with a knife, and Levit achieves the same palpable sense of presence, intimacy and profound communication on this recording. It’s as if you’re in the room with him, quietly observing, listening, almost without breathing, while he plays. He finds incredible delicacy in the quietest reaches of the dynamic range – technically hard to achieve and emotionally wrought – and the entire album has a compelling processional quality, felt most strongly in Liszt’s transcription of Wagner’s Solemn March to the Holy Grail from Parsifal, to which Levit brings immense control and a hushed, prayer-like quality to the magisterial architecture of this work. The Fantasia and Fugue on the Chorale ‘Ad nos, ad salutarum undum’, the longest work on this 2-disc recording, is another glowing transcription, also by Liszt, demonstrating that music, like life, is subject to change. Isolde’s passionate Liebstod and Busoni’s poignant Berceuse pave the way for the final work on the recording.

Bill Evans: ‘Peace Piece’
Bill Evans’ ‘Peace Piece’ matches the solemnity and intensity of the rest of album but in its ostinato bass and delicate treble filigrees, so redolent of Chopin’s tender Berceuse, there is, finally, a sense of consolation. It’s the perfect close to this extraordinary collection of music, and leaves one wondering what this fiercely intellectual and highly individual pianist will do next……