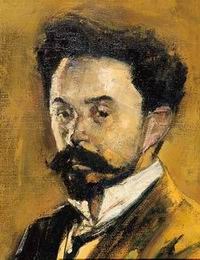 What happens when new neural connections within your brain break down the boundaries that normally exist between the senses? For one, hearing a particular musical note might cause you to see a particular color, or you may actually taste spoken words. In medical terms this neurological phenomenon is called synesthesia, and those afflicted experience the world in a completely different way. We are not certain that Alexander Scriabin (1872-1915) actually experienced synesthesia. However, we are sure that he dedicated his life to creating musical works that sought to open the doors to the spiritual realm.

Scriabin was born into an aristocratic family in Moscow, and took piano lessons at an early age. Despite his small hands that could barely stretch to a ninth, he rapidly developed as a pianist and eventually was admitted to the Moscow Conservatory. His teacher included Arensky, Taneyev and Safonov, with Scriabin launching an international concert career in 1894. His earliest compositional efforts were greatly inspired by Chopin and other icons of the Romantic piano repertoire. But he also started to sketch a number of orchestral works—among them two symphonies—which eventually led to his professorial appointment at the Moscow Conservatory in 1898. Scriabin confided in his diary that he was seriously thinking about writing an opera based on a nameless hero. However, the opera project was not realized, as Scriabin left his wife and four children in 1903 and relocated to Switzerland. Backed by generous financial support, Scriabin would travel throughout Western Europe and the United States for almost six years.

During his time abroad, Scriabin developed a highly personal compositional language, experimenting with new harmonic structures and sonorities. This evolution of his compositional language went hand in hand with his discovery of the theosophical teachings of Helena Blavatsky. Placing his work as a composer in the wider spiritual and intellectual context of his age, Scriabin “embraced theosophy as an intellectual framework for his profound feeling about humankind’s quest for God.” In musical terms that meant the construction of chords on harmonies based on the intervals of a fourth or fifth, resulting in “frozen dissonances, solidified in a color-like effect.” Scriabin conceived his Poem of Ecstasy or Fourth Symphony in 1905. This single-movement tone poem is intended as an orgiastic, orgasmic excitation and release of a ginormous climax. “When you are listening to this work,” Scriabin explained, “you are looking straight into the eye of the Sun!”

After his return to Russia in 1909, Scriabin began work on gigantic multimedia projects involving music, scent, dance and light. Mysterium was planned for performance in the foothills of the Himalayas, and represent “a grandiose religious synthesis of all arts, which would herald the birth of a new world.” The project was never completed, as Scriabin died aged 43 of septicemia as the result of a pimple on his upper lip. Interest in his funeral was such that tickets had to be issued! However, both music and the man were severely criticized, and his compositions for a time banned in Western Europe. Aaron Copland called his music “one of the most extraordinary mistakes of all times,” and various commentators considered Scriabin a “sad pathological case, erotic and egotistic to the point of mania.” His reputation has only recently undergone a fundamental change of direction, and Scriabin is now rightfully considered “one of the greatest of modern composers.”