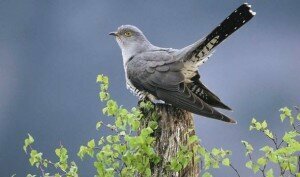 For music and nature, birds are the natural – they sing! Or, rather, we hear their communication as singing. A friend in Hong Kong trains birds to sing, playing them beautiful songs from model birds to learn. The ones with good voices he keeps and the ones who aren’t trainable go back to the bird market for someone to enjoy a different way.

Birds make all kinds of sounds – but very few are as songlike as we imagine. Many of the birds produce a kind of pitched rhythm, rather than a song. We need to bring a lot of imagination to the idea of bird and song. 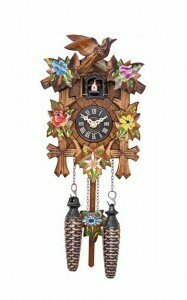 One of the most recognizable of the birds is the cuckoo, with its plaintive but distinctive falling pitch. In music, composers including Vivaldi, Beethoven, Handel, Respighi, Rimsky-Korsakov, Saint-Saens, and Delius all brought the cuckoo into their music. It’s Delius, however, who marks the new Spring with hearing the cuckoo.

Birdsong: The Cuckoo
Delius: 2 Pieces for Small Orchestra: No. 1. On Hearing the First Cuckoo in Spring
The traditional cuckoo clock also preserves this distinctive song.

Orlando Gibbon took the idea of the swan song as the basis for his madrigal The Silver Swan, which, while living, ‘had no note,’ but which, as death approached, had her ‘silent throat’ unlocked, to give us this aphorism: ‘More geese than swans now live, more fools than wise.’ 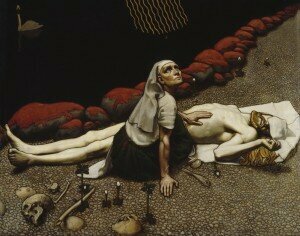 Akseli Gallen-Kallela (1897) Lemminkäisen äiti (Lemminkäinen’s Mother), showing the mother with her slain son, with the Swan on the black river.

Gibbon: The Silver Swan
Jean Sibelius, on the other hand, gave us the Swan of Tuonela sailing on the black river of Tuonela, the Finnish land of the dead. The English horn becomes the voice of the swan – lyrical but inarticulate. In the story, the Finnish hero Lemminkäinen has been tasked with killing the swan, but a poisoned arrow finds him instead.

Sibelius : Lemminkäinen Suite, Op. 22: II. The Swan of Tuonela
The lark is noted for its elaborate calls and for singing while in flight.

Birdsong: The Lark
This joy of song in the flight was captured by Vaughan Williams in The Lark Ascending, with its infinite variable song. RVW wrote lines from the poem of the same name by George Meredith at the beginning of the music:

He rises and begins to round, / He drops the silver chain of sound, / Of many links without a break, / In chirrup, whistle, slur and shake. / For singing till his heaven fills, / ‘Tis love of earth that he instils, / And ever winging up and up, / Our valley is his golden cup, / And he the wine which overflows / To lift us with him as he goes.

Vaughan Williams: The Lark Ascending
The modern French composer Olivier Messiaen is most famous for his integration of birdsong into his music. His work for piano and orchestra, Réveil des Oiseaux, is almost entirely made up of bird song. The title means ‘Dawn Chorus,’ referring to the outburst of bird song at daybreak.

The Lark in flight © Pete Walkden

Messiaen also wrote a seven-part Catalogue d’oiseaux, a set of 13 piano pieces all based on birdsong, including this wonderful owl. Messiaen sought to present not only the birds in his Catalogue, but also their environment – the ‘sights, sounds, smells and thermal currents’ of the countryside, as he wrote. In the score for the Alpine Chough (a kind of crow), for example, he has written ‘acrobatic flight of choughs above the abyss’

Messiaen: Catalogue d’oiseaux (Catalogue of Birds) : 1er Livre: Le Chocard des Alpes (Alpine Chough)
Through his study of bird song, Messiaen became a noted ornithologist. As a composer, however, he also found that in order to make bird song accessible to the human ear, it was necessary to drop it in pitch, slow down the tempo, and add chording to the melody notes so as to preserve the timbre. His birds may not be the birds you hear, but he was listening with a composer’s ear.

Go outside, listen for your local bird – what’s the music you hear?