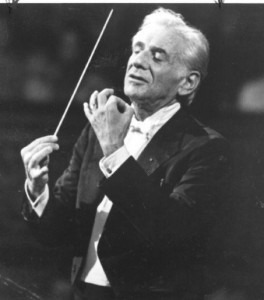 There can be no doubt that Leonard Bernstein (1918-1990) was “one of the most prodigiously talented and successful musicians in American history.” He once told the New York Times, “I want to conduct. I want to play the piano. I want to write for Hollywood. I want to keep on trying to be, in the full sense of that wonderful word, a musician. I also want to teach. I want to write books and poetry, and I think I can still do justice to them all.” It is hardly surprising that Time magazine called him “the Renaissance Man.” His boundless energy and contagious attitude toward music resonated deeply in American culture, and for Bernstein “Life without music is unthinkable, and music without life is academic.” Yet, behind his outgoing and deeply engaging personality was a person who seemed to hide an essential inner loneliness and professional insecurities. Struggling to come to terms with his homosexuality throughout, Bernstein was decidedly unhappy that his professional fame rested almost exclusively on his music for the theater. As has been noted, “his distinct periods and shifts in his personal and professional development became a metaphor for the evolution of 20th-century American culture.”

Bernstein was the son of immigrant Russian Jewish parents, and classical music was not a central part of his upbringing. Nevertheless, his fabulous musical talent, enthusiasm, insight and memory attracted immediate attention. Completing his studies at Harvard, he enrolled at the Curtis Institute of Music, and in November 1943 made his spectacular conducting debut at Carnegie Hall. Substituting for the indisposed Bruno Walter, Bernstein held the audience and the orchestra spellbound and became an overnight celebrity. Propelled by his spectacular debut, Bernstein was appointed at the City Symphony of New York and presented a program of American music in Europe and Palestine. A number of highly significant recordings followed in quick succession, and on 20 November 1957 he was named music director of the New York Philharmonic.

During the 1950’s, Bernstein scored his major triumphs on Broadway and on television. His musicals contain the finest music ever written for the American music theater, and his compositional legacy culminated in the tremendous popular and commercial success of West Side Story. Simultaneously, Bernstein effectively used television to forge a lasting connection between serious music and the general public. He introduced new works, helped to raise the income of orchestral musicians and almost single-handedly sustained the domestic classical recording industry. In the process, Bernstein had become fabulously wealthy, but his career was gradually suffering “disarray, turmoil and finally a touch of decadence.” His serious compositions became “an embarrassing and confused mélange of theater, politics, personal confession, theology and music,” and his ambitions of writing an opera ended in dismal failure. His efforts to return to Broadway, particularly his 1600 Pennsylvania Avenue did not fare much better.

Leonard Bernstein: Clarinet Sonata
Although Bernstein never stopped conducting, his personal life took on a new direction. Publically acknowledging his homosexuality, he distanced himself from his 25-year marriage to actress Felicia Montealegre, and surrounded himself with young male admirers. Bernstein had been diagnosed with emphysema in his mid-20s and was supposed to be dead by age 35. In 1986, he jokingly confessed, “Well, I beat the rap. I smoke. I drink. I stay up all night. I screw around. I’m overcommitted on all fronts.” Apparently, Bernstein wanted to die on the podium like Mitropolous, who had collapsed while rehearsing Mahler. In the event, Bernstein’s final year was far less romantic and included a number of canceled tours and abandoned projects. He did, however, still manage to conduct Beethoven’s 9th Symphony for the German reunification concert in 1989. Bernstein announced his retirement from conducting on 9 October 1990, and died of a heart attack five days later. Bernstein’s legacy as an educator and conductor has never been more vital. Above all, he generated tremendous excitement in the concert hall, granting everybody access to an art form “that every human being deserves to experience.”