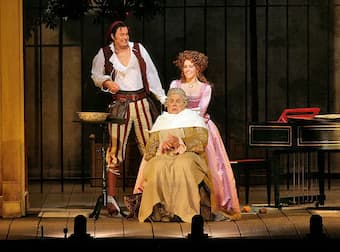 Doctor Bartolo gets prepared by Rosina for a shave, Figaro at the ready (Metropolitan Opera) (Photo by Ken Howard)

Doctors in the 19th century in opera began to reflect the change in the field – now fewer are allied with the black arts and there are more specialties. Doctors can be heroes in the opera, they can be the support to the lead character, they can be used to show the medical side of a situation.

Bohemian composer Adalbert Gyrowetz wrote his opera Der Augenarzt (The Oculist) in 1811 and the story is of a successful doctor for the first time. Our hero, an ex-military doctor, cures two blind girls and so gains his love.

A revisit of a work that already appeared in the 18th century is Giaoachino Rossini’s Il barbiere di Siviglia, which was given its debut in Rome at the Teatro Argentina on 20 February 1816, originally had the title of Almaviva, ossia L’inutile precauzione (Almaviva, or The Useless Precaution) because Paisiello’s setting was still well-known. Rossini’s setting didn’t change its title to one we know today until after Paisiello’s death on 5 June 1816, 5 months after its premiere as Almaviva. 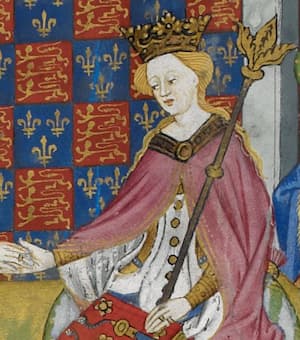 Ignatz Walter took up the Doctor Faust story where a doctor makes a pact with the Devil, exchanging his soul for unlimited knowledge and worldly pleasures. The story comes from German legend and is based on the historical figure of Johann Georg Faust (c. 1480–1540). From the beginning, Faust walked a line between being a doctor of theology and a doctor of medicine. Walter’s character in the opera Doktor Faust made his first appearance on the stage in 1787 but was revised several times until it appeared in Regensburg at the Hoftheater in 1819.

In Giacomo Meyerbeer’s opera Marguerite d’Anjou, Marguerite is served by Michele Gaumotte, ‘medic, musician, and barber.’ Michele is a major character in the opera, helping to save the queen and her son at the end and bringing two separated lovers together. In this scene, Michele tells Isaura not to worry, she will be reunited with her Lavarenne.


Doctor Aliprando is the personal physician to Corradino, the bad guy, who is full of threats of imprisonment for those who challenge him. Then he meets Matilde and his softer side comes out. The final scene is set by a waterfall where Matilde has been falsely condemned to death for having released prisoners. The Contessa (a rival to Matilde) actually engineered the release and when her role is revealed to Corradino, he feels he can only kill himself for having sent Matilde to die in error. He’s prevented by Dr Aliprano and Ginardo who reveal that Matilde is alive and all rejoice.


In Louis Spohr’s Pietro von Abano, the lead character is a scholar-doctor of the black arts. He’s in love with Cäcilia and when she dies unexpectedly, steals her body and uses his black arts to enthrall her soul. He’s working in conjunction with the Devil for these powers. However, Antonio, Cäcilia’s betrothed blocks Pietro’s plans. The discovery of Cäcilia’s long-lost twin sister Rosa comes to a happen ending for Antonio and Rosa while Pietro is dragged off to be executed and a priest blesses the body of Cäcilia to release her soul.


Doctors and their potions are at the core of our next two operas: Doctor Lorenzo in Bellini’s 1830 opera I Capuleti e i Montecchi, supplies Juliette with her sleeping potion that looks so much like death to poor Romeo.

Doctor Dulcamara in Donizetti’s L’elisir d’amore is the cheerful swindler of all with his potion. His patter song, ‘Udite, udite, o rustici,’ is a perfect indication of his fraudulent nature. 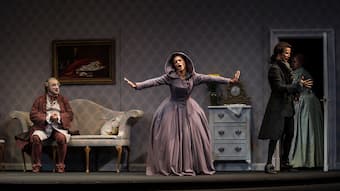 Don Pasquale, the elderly bachelor, wants to be married but his physician, Dr Malatesta, wants to show him how foolish this would be. Malatesta sets Pasquale up with a fake wife who is demure before the wedding but demanding after the ceremony. The bills pile up and the servants laugh at the unhappy Don Pasquale and finally, the false wife is sent away, while the real lovers are reunited. The opera closes with a grand quartet with the moral of ‘don’t marry in old age.’


In Albert Lortzing’s 1846 opera Der Waffenschmied (The Armourer), the character of Hans Stadinger is a doctor, but of animals. In addition to being a veterinarian, he’s also the armourer of the title and is in the role of the father trying (vainly) to keep his daughter from marrying her love. 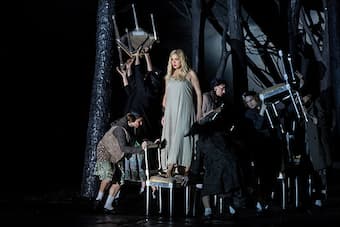 Anna Netrebko as Lady Macbeth in the Sleepwalking Scene, 2021 (Mariinsky)

Bringing us up to the mid-19th century are Verdi’s Macbeth and Otto Nicolai’s Merry Wives of Windsor. In Macbeth (1847), the doctor (bass) has been called by Lady Macbeth’s maid to observe her sleepwalking and hand gestures as she vainly tries to rid her hands of the bloodstains.


Otto Nicolai’s Die lustigen Weiber von Windsor (The Merry Wives of Windsor) pits a young woman and the man she wants to marry against her parents’ choices. In the end, Anne marries Fenton, and Dr. Cajus and the nobleman Spärlich are left without partners. The Merry Wives tease Falstaff and get back at their husbands for their jealousy.


Over the 19th century, doctors evolved from simple foils and fakes to medical professionals who have real roles in opera. Heroes and villains, anxious fathers and unlucky old men who seek youth, all have appeared under the name doctor!