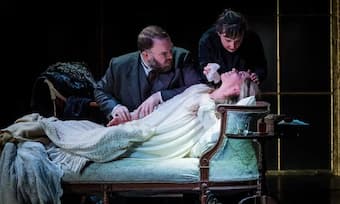 As we progress further into the 19th century, doctors (be they medical or learned) become more than just figures of fun. In the last article, we saw doctors becoming major characters, if not the central character. In 1850 and beyond, doctors continue to develop.

In the Ricci brothers’ 1850 comedy, Crispino e la comare (Crispino and the Fairy), shoemaker Crispino becomes a doctor courtesy of a fairy’s wish, but when he becomes overbearing, he’s quickly returned to his former trade.

In the next opera, La Traviata, the doctor isn’t the central figure, but the heroine’s health is certainly the central concern. Verdi’s 1853 heroine, Violetta, has the disease of the age, tuberculosis, and from the first act, where she discretely is coughing blood into her handkerchief, to the final act, where she expires, the disease is the driving force for her actions, although her lover and his father seem quite unaware of her problem. Dr Grenvil (bass) appears in the very first party scene but doesn’t actually speak until the final scene when he visits Violetta on the evening of her death.


Verdi’s next opera, the grand opera Les vêpres siciliennes / I vespri siciliani (The Sicilian Vespers) of 1855, also has a doctor as a character. Dr Jean Procida (bass) is a major character who makes his first appearance in the second act when he celebrates his return to Palermo from exile. He’s also integral to the plot to attack the French, who are occupying the country.


George Bizet’s one-act operétte, Le docteur Miracle, put yet another mock doctor at the center of the action. Dr Miracle is actually army officer Silvio who uses the cover of Miracle’s advertising to hide his wooing of the mayor’s daughter Laurette. Silvio is not only Dr Miracle but the servant Pasquin. Pasquin serves a terrible omelet that might have been poisoned and Laurette takes her ailing father to the doctor. The doctor’s price for his cure? The hand of Laurette! In the end, Silvio gets Laurette and all agree that the doctor’s cure was Love.


Peter Cornelius 1858 comic opera Der Barbier von Bagdad (The Barber of Bagdad) goes back to an earlier definition of barbers as barber-surgeons. Abdul Hassan Ali Ebn Bekar (bass), is the barber of the title who helps the hero Nureddin (tenor) become engaged to Margiana (soprano). Her father, of course, wants to marry her off to a rich friend and the usual operatic farce ensues. 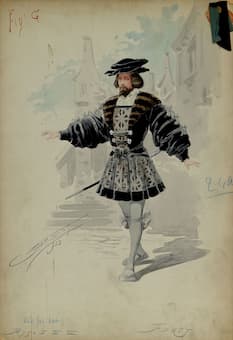 The figure of Attilio Comelli as Faust, 1903 (Archivio Storico Ricordi)

Two Gounod operas feature doctors – one a mock doctor and the other the evil doctor of the 19th century. In his 1858 opera Le médecin malgré lui (The Doctor Despite Himself) Signarelli (baritone), who is actually a woodcutter, is mistaken for a doctor.

It was Gounod’s Faust, in 1859, that gave us the philosopher, metaphysician, and aging scholar Dr Faust who makes his deal with Méphistophélès: youth for his soul. He’s attracted by the beautiful Marguerite and seduces her. In the end, she is taken up to heaven while Faust must remain behind and below with Méphistophélès. 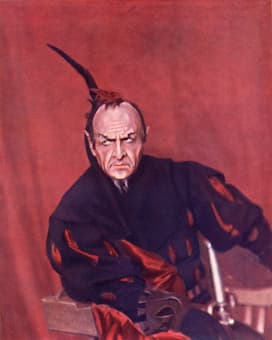 The character of the doctor in Verdi’s 1862 La forza del destino gives us a surgeon in the Spanish army. In Act 3, the doctor describes the action of a battle.

The scholar Faust turns up again in Arrigo Boito’s Mefistofele (‘Mephistopheles’). This was the only opera of a composer who is otherwise known as a librettist. In this opera, Faust is redeemed at the end when he seizes a Bible and receives forgiveness, and is taken up to heaven to be with Margareta. 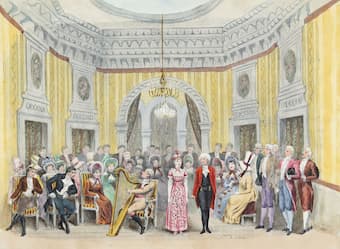 In a comedic clash of modern inventions against a traditional town, Le docteur Ox, in Offenbach’s 1877 opéra bouffe, comes to the town of Quiquendone in Flanders, where ‘things take ten times longer to happen…’. He promises free lighting system but in his gas factory, creates a gas, oxygen, that will energize the people and bring fame to the town. It works but the people get over excited and, in the end, the gas factory blows up, returning the town to normal.

Jacques Offenbach’s 1881 opera Les contes d’Hoffmann (The Tales of Hoffmann) has two different doctors who thwart Hoffmann in his great loves. The first is the inventor Dr. Spalanzani, who has created the beautiful Olympia. Hoffmann falls in love with the doll and when he sees her with the magic glasses, believes she’s alive. She’s smashed by her co-creator, Coppélius, who has given Hoffmann his magic glasses, and Olympia her beautiful eyes. 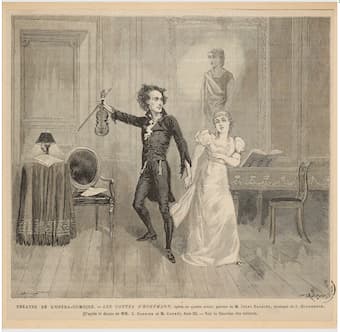 In Act 2, Hoffmann has located Antonia, who has been hidden by her father from Hoffmann. Because of a mysterious illness, Antonia has been forbidden by her father to sing because it will kill her. Her mother had been a famous singer. Dr Miracle, Hoffmann’s nemesis, hears of Antonia’s promise but persuades her to follow her mother’s path to glory. He animates an image of Antonia’s mother and Antonia sings, and dies. In this image from the premiere, it’s remarkable how alike Dr Miracle and his violin look like the virtuoso violinist Paganini, underlying both the character and the violinist’s supposed links with the devil. 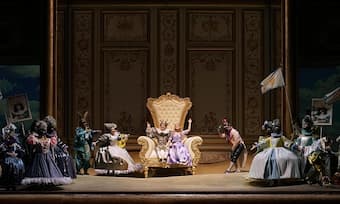 As the century progressed we have the ‘huddle of doctors’ in Ruperto Chapí’s 1891 zarzuela El Rey que rabió (The King who was Rabid) who have to decide if the king, who was visiting his people in disguise, was bitten by a dog and will catch (the then-fatal) rabies. Luckily, there’s been a mixup and the king is safe. Doctor Mateus (bass) is in Carl Reinecke’s Der Gouverneur von Tours (Governor of Tours) of 1891 and Wilhelm Kienzl’s Heilmar der Narr where Heilmar, a shepherd, travels and meets Der Quacksalber, a quack doctor who promises cures for everything.

In Verdi’s Falstaff, which had its premiere at La Scala in 1893, Doctor Caius (tenor) is one of the three suitors for Nanetta Ford. He’s supported by Nanetta’s mother, whereas her father supports Master Slender. Anne, of course, has her own eye on Master Fenton. In the grand ending scene, Dr Caius and Fenton get their brides, but only Fenton gets the right one. Caius ‘marries’ Falstaff’s servant Bardolfo who is in women’s clothes. 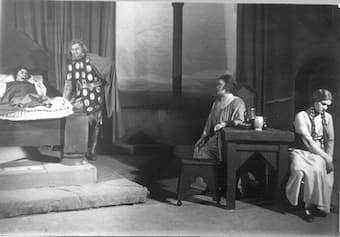 In Hans Pfitzner’s Der arme Heinrich (Poor Heinrich), Heinrich, a noble knight, has been stricken with leprosy and ‘can be cured only by the heart’s blood of a virgin who willingly sacrifices herself for his salvation. When the doctor is about to cut out the girl’s beating heart, Heinrich changes his mind and realizes what a terrible situation he has created. He accepts his leprosy as God’s will and the girl is released.

Complex social beliefs come to the fore in Josef Foerster’s 1899 opera Eva. Samko, a wealthy miller, husband of Eva, formerly a seamstress, has caused their daughter’s death by refusing to call the doctor, who he considers as living in sin since he married a divorcée. She drifts back to a former lover while awaiting her divorce; when the divorce is not granted she kills herself by drowning. The opera was one of the ‘new realism’ works of the turn of the century, being one of the ‘village-operas’ that Janáček’s Jenůfa characterized later.


Our final 19th-century opera returns a familiar doctor: Bomelius, the Tsar’s doctor. Rimsky-Korsakov’s The Tsar’s Bride revolves around a love potion that goes wrong. Lyubasha demands a love potion from Bomelius so that she can supplant Marfa in the Tsar’s eyes. Bomelius demands her love in payment but she refuses him, so he threatens to expose her. She finally accedes to Bomelius’s demands and in the next act, she has poisoned the Tsar’s bride. All die at the end, for the most part.