Giacomo Meyerbeer’s five-act opera Robert le diable premiered at the Paris Opera on 21 November 1831. It was the first of four works for which Meyerbeer was to become one of the most prominent composers of opera at the time. The immediate success of the opera was breathtaking! 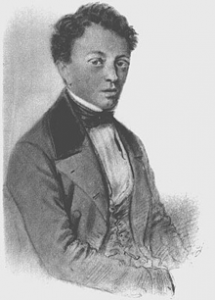 It was considered a “remarkable work in the history of art,” and it placed Meyerbeer at the head of European opera composers. Richard Wagner delighted in the “almost sinister and deathless atmosphere,” and Frédéric Chopin, who was in the audience during the premiere wrote, “If ever magnificence was seen in the theatre, I doubt that it reached the level of splendor shown in Robert…It is a masterpiece…Meyerbeer has made himself immortal.” Cashing in on this phenomenal operatic success, a number of composers produced arrangements, variations and fantasies based on melodies from the opera. Not to be outdone, Chopin and his friend the cellist Auguste Franchomme prepared their own homage. Chopin devised the structure of the piece and wrote the piano part, while Franchomme composed the cello part. The piece was published under both their names in 1832, and was favorably reviewed by Robert Schumann. 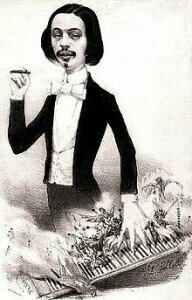 Frédéric Chopin: Grand Duo on themes from Meyerbeer’s Robert le diable
Adolfo Fumagalli (1828-1856) was one of the principle piano virtuosos of the first half of the 19th century. In Belgium, they even called him the “Paganini of the piano!” A member of an extended musical family, Adolfo studied at the Milan Conservatory and gave his much-celebrated debut in Milan in 1848. Subsequently, he embarked on a series of concert tours that took him to the major cities of Italy, France, and Belgium. He astonished audiences with his dazzling technique and acquired a reputation for performances using his left hand alone. It was said, that his left-hand arrangements were motivated by his desire to hold a cigar with his right hand while performing! He composed a large body of piano music; many of them operatic fantasies, and his colleague Filippo Filippi observed in him “the growing originality of ideas constructed most simply and most faultlessly, restraint in ornamentation, with complete freedom from the commonplace and banal.” Not unexpected, his left-hand fantasy on Meyerbeer’s Robert le diable became a crowd favorite.

Adolfo Fumagalli: Grande Fantaisie pour la main gauche sur Robert le diable de Meyerbeer, Op. 106
In 18th century music, the term “potpourri” designated a hodgepodge of tunes from pre-existing sources. It applied to collections of songs, dances or instrumental pieces that often included a set of variations on a selected theme. When selections from popular stage works became all the rage during the 19th century, the potpourri took center stage in presenting light music using themes familiar to the audience. Particularly popular in orchestral and military band concerts of light music, the potpourri predictably made its way into the salons of the musical amateurs. Franz Doppler (1821-1883) was a student of Franz Liszt, and he fashioned orchestral arrangements of six Hungarian Rhapsodies by his teacher. He also composed 5 operas, but was chiefly known as a composer for the flute. And given the huge success of Robert le diable, Franz Doppler wrote two potpourris on different themes from the opera, both published in 1867. 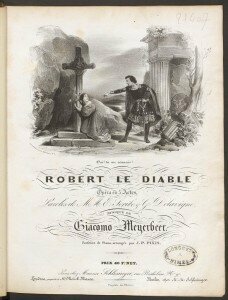 According to Ignaz Moscheles, Jacob Beer was “one of the greatest virtuosi of his period.” Nevertheless, Beer was determined to make his name as an operatic composer in Paris, and after spending some time in Italy changed his name to Meyerbeer and became a superstar in the French capital. Robert le diable, with the libretto penned by Eugène Scribe, represents the merging of the German orchestral style with the Italian vocal tradition and the French theatrical spectacle, and it consolidated the genre of “Grand Opéra.” By 1834, the opera had received over 100 performances in Paris, and King Frederick William III of Prussia, who attended the second performance, invited to stage Robert in Berlin. Such notoriety naturally attracted the attention of Franz Liszt, whose most famous transcription took themes from the opera and reworked them into his Reminiscences de Robert le diable. Believe it or not, the Reminiscences sold all 500 printed copies on the day of publication!