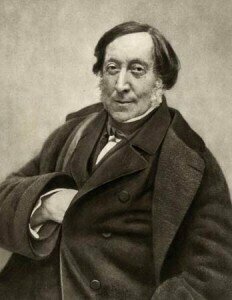 When Gioachino Rossini (1792-1868) spontaneously decided to retire in 1829, he was universally considered the most popular opera composer in history. No other composer enjoyed his prestige, popular acclaim and artistic influence, and his earliest biographer described him as “a genuine thunderbolt out of a clear, blue sky for the Italian lyric theatre.” Gioachino was born in Pesaro, a small city on the Adriatic. Both parents were musicians; his father a horn player of some ability and his mother a leading singer at various theatres of the Romagna region. The Napoleonic wars brought the family to Bologna, where young Gioachino entered the Liceo Musicale in 1806. He took courses in singing, piano, the cello and counterpoint, and the Teatro San Moisè of Venice commissioned his first opera in 1810. Rossini composed a number of follow-up works for Bologna, Rome, Venice and Milan, but his international breakthrough came on 6 February 1813 at the Teatro la Fenice in Venice with the idyllic opera seria Tancredi.

Gioachino Rossini: Tancredi, Act I excerpts
It may come as a surprise, but Rossini was not simply the composer of some delightful comic operas, but historically more important as a composer of opera seria. With Tancredi Rossini solved the “Aria problem,” which generally permitted lyrical expression but froze the dramatic action. Rossini’s solution was to compose two successive and separate lyrical sections, an opening lyric “cantabile” and a virtuoso concluding “cabaletta.” At the age of 21, Rossini had established himself as the premiere composer of Italian opera. As such, he was approached by the impresario Domenico Barbaia in 1815, and contracted as the musical director of the Teatro di San Carlo and the Teatro del Fondo at Naples. He would compose one opera a year for each venue, and Rossini even received a share from the gambling tables Barbaia was running in the foyer of said opera houses. But it was the Teatro Argentina in Rome that produced Rossini’s greatest of all comic operas on 20 February 1816. Il barbiere di Siviglia was composed in less than 3 weeks, and Verdi subsequently claimed, “I cannot help thinking that Il barbiere di Siviglia, for the abundance of true musical ideas, for its comic verve and the accuracy of its declamation, is the most beautiful opera buffa there is.” 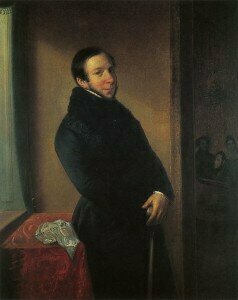 When Rossini met Beethoven in 1822, the elder musical statesman communicated in writing, “Ah, Rossini. So you’re the composer of The Barber of Seville. I congratulate you. It will be played as long as Italian opera exists. Never try to write anything else but opera buffa; any other style would do violence to your nature.” Between 1815 and 1823 Rossini produced 20 operas that introduced wide-reaching reforms of serious opera. And since he had gained an international reputation he moved from Italy to Vienna, with the city welcoming him as a hero. A highly successful tour of England in 1823 included a meeting with King George IV, and one year later Rossini was appointed director of the “Théâtre Italien” in Paris. Among his contractual duties agreed upon with the French government, the veteran composer of 33 operatic productions was to write a brand new “Grand Opéra. And Rossini responded with Le comte Ory, premiered on 20 August 1828, and with Guillaume Tell in 1829.

Gioachino Rossini: Guillaume Tell
Financially secure and at the height of his operatic career, Rossini spontaneously decided to retire. The compositional hyperactivity of his early life was now followed by almost four decades of inactivity. Although opera houses frequently begged him to compose new works, Rossini would graciously decline all offers. There are no simple reasons for such a personal decision, but political and artistic events—including the 1830 revolution and the enormous success of Meyerbeer’s first operas—might certainly have strengthened his resolve. In addition he was continually ill and seemed to be living on the brink of spiritual and physical death. He initially moved back to Italy but returned to Paris in 1855. After a brief period of creativity in which his main attention was directed towards sacred music Rossini fell seriously ill in the autumn of 1868, and he died on 13 November. Thousands attended his funeral, and memorial services were held throughout France and Italy. As we celebrate the 150th anniversary of Rossini’s death, we remember an extraordinary composer who exerted a tremendous influence on his musical, literary, philosophical and political surroundings, influences that were felt well into the 20th century.