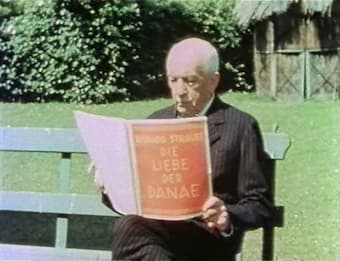 The first public performance of Richard Strauss’ opera Die Liebe der Danae (The Love of Danae) took place as part of the Salzburg Festival on 14 August 1952. At that time, the composer had already been dead for three years. However, Strauss had finished the opera, an ingenious mixture of comedy and Greek mythology, already in 1940. As with all Strauss operas, opera houses fought over the chance to premiere a brand-new work. However, a scheduled premiere in Dresden had to be cancelled, and the orchestral parts of the new opera were lost in a fire in Leipzig. Not to be outdone, Allied air raids damaged the opera sets and scenery in Munich. Strauss had seen enough, and he refused to allow the first performance until after the war. Yet at some point, he granted permission to the conductor Clemens Krauss for a performance of the opera as part of the Salzburg Festival on 11 June 1944 in commemoration of the composer’s 80th birthday. 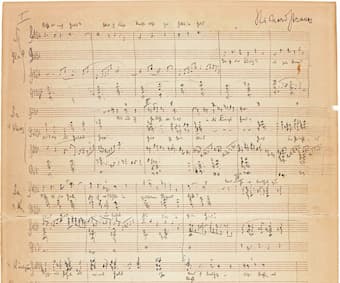 Everything was in place for this particular performance, but when Claus von Stauffenberg and other conspirators attempted to assassinate Adolf Hitler on 20 July 1944, the Minister of Propaganda Joseph Goebbels cancelled all music festivals and closed all theaters in the Third Reich. However, Salzburg had special cultural status in the Reich, and somehow, rehearsals were allowed to continue. On 16 August 1944, Strauss and invited guests were allowed to hear the work performed. As Rudolf Hartman, the opera’s original producer wrote, “Strauss walked down to the orchestral rail in order to listen closely. Towards the end of the second scene in Act 3 Strauss stood up and went down to the front row of stalls. His unmistakable head stood out in a lonely silhouette against the light rising from the pit. The Viennese were playing the wonderful Interlude before the last scene (Jupiter’s renunciation, as Strauss once called it) with an unsurpassable beautiful sound. Quite immobile, totally oblivious to all else, he stood listening.” 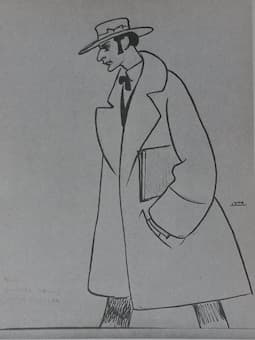 As the performance continued, listeners were “profoundly moved and stirred to our depths, sensed the almost physical presence of our divinity, art… Several moments of profound silence followed after the last notes died away… Kraus spoke a few sentences outlining the significance of these last days in Salzburg. Strauss looked over the rail of the pit, raised his hands in a gesture of gratitude, and spoke to the orchestra in a voice choked with tears: Perhaps we shall meet again in a better world. He was unable to say any more… Silent and deeply moved, everyone present remained still as he left the auditorium.” The origins of the opera date back to the 1920s, when Strauss proposed Danae as the heroine of a mythological opera to Hugo von Hofmannsthal, and they eventually settled on Die ägyptische Helena. After Hofmannsthal’s death, Strauss worked with Stefan Zweig, and subsequently with Joseph Gregor. This working relationship was fraught with difficulties, and Gregor was forced to adopt a storyline based on a Hofmannsthal sketch. “There was long, painful rewriting, and as usual the composer wounded his subservient partner by taking outside advice from Zweig, Clemens Krauss, and director Lothar Wallerstein. 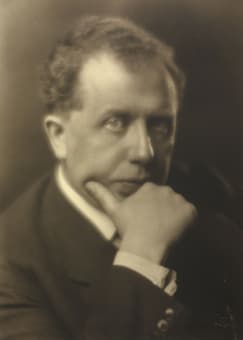 The story centers on Danae, whose father King Pollux is bankrupt and beset by creditors. As he is searching for a rich husband for his daughter, Danae’s portrait has garnered interest from King Midas, who can turn everything into gold that he touches. As his arrival is announced, Danae welcomes a stranger who is actually Midas, disguised as his own servant. They are immediately drawn to each other to welcome the supposed King Midas, who turns out to be the god Jupiter in pursuit of another female conquest. As Jupiter prepares for his marriage to Danae, he is fearful that his wife Juno will discover his doings, and he asks the disguised Midas to stand in for him at the ceremony. Predictably, when Midas and Danae embrace, she is turned into a golden statue and Jupiter claims her as his divine bride. When she calls out for Midas, she is returned to life and Jupiter announces that she will be cursed with poverty. Danae confesses to Midas that it was love rather than his golden cloak that won her heart, and Jupiter pays off King Pollux’s creditors with a shower of gold. Jupiter tries once more to win Danae back, but she gives him her last gold possession, and the god accepts his loss. The music for Danae is an “anthology of Strauss’ familiar modes.” However, as a scholar writes, “Strauss once again weaves his intricate thematic web to devise vocal flights of every kind and to make his orchestra glow in a new vein of seasoned maturity.”