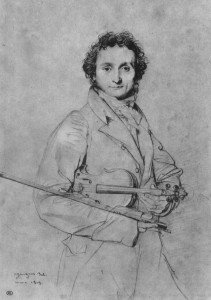 The French neo-classical painter Jean-Auguste-Domique Ingres (1780-1867) was very much a student of the academic painter Jacques-Louis David and brought David’s classical and restrained model into the nineteenth century. In addition to his considerable painting skills, he was also a passionate violinist, and as Director of the French Academy in Rome, performed with the music students.

Gounod, who was a student at the French Academy in Rome while Ingres was director, merely noted that Ingres “…was not a professional, even less a virtuoso.’ Despite that less-than sterling notice, he performed Beethoven string quartets with Paganini, Liszt thought his playing charming and dedicated his transcriptions of Beethoven’s Symphony No. 5 and 6 to the artist. 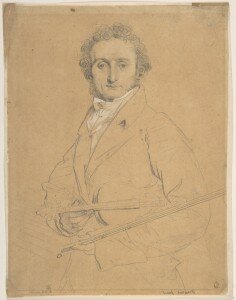 Ingres: Paganini (between 1818 and 1831) embellished counterproof
(Metropolitan Museum of Art)

Music was important to Ingres, who was known to use musical metaphors when working with his painting students. “If I could make musicians of you all, you would thereby profit as painters. Everything in nature is harmony; a little too much, or else too little, disturbs the scale and makes a false note. One must teach the point of singing true with the pencil or with brush quite as much as with the voice; rightness of forms is like rightness of sounds.”

Sometime between 1818 and 1831, Ingres did portraits of the violin virtuoso Niccolò Paganini. Ingres had played second violin with Paganini when they performed the Beethoven string quartets. In Rome, Ingres was known for the hundreds of charcoal sketches he did of the famous and not-so-famous people he saw. His portrait of Paganini captures a real person, casually holding his violin under his arm, looking at his audience with a level gaze. There’s an authority in that look and yet his wild hair speaks to something outside the norm. 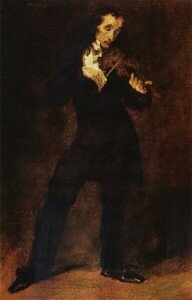 There’s a slightly different look in this version, which was created by Ingres as a guide to the engraving that was made of the picture. Note the difference in the eyes.

Compare these two images with Eugene Delacroix’ painting of Paganini, which seems much more in line with his reputation as a demon violinist. 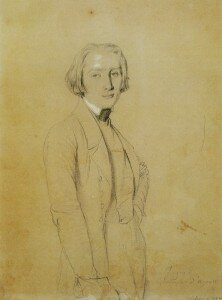 A drawing of the youthful Franz Liszt in the same charcoal drawing style gives us the virtuoso who was cutting a swath across Europe.

Liszt: Gounod – Les sabeennes, berceuse de l’opera La reine de Saba, S408/R167 (Soeyon Kate Lee, piano)
As Paganini was the violin, Liszt was to the piano – the supreme virtuoso. His time in Paris in the 1830s drove his desire to greatness after seeing a charity concert organized by Paganini in 1832. Paris, at the time, was the piano capital of the world with dozens of pianists aiming at fame. Liszt’s technical skills, his strength, and his abilities carried him ahead of his rivals.

His painting of his friend Luigi Cherubini shows a curious duality. After painting Cherubini in modern dress, Ingres, some years later, decided to ‘ennoble’ the portrait by adding the allegorical figure of the Muse of Lyric Poetry (Erato) in the background to depict musical inspiration. The cracks on her face are a defect that occurred when Ingres overpainted the Muse onto the older picture. 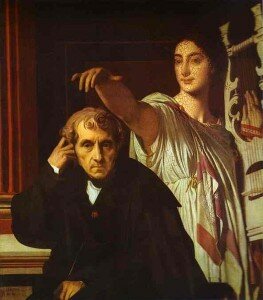 In a sense, Offenbach, as director of the Paris Conservatoire, was equivalent of Ingres, who was Director of the French Academy at the Villa Médicis in Rome – both held equally dogmatic ideas about the necessity for history and tradition in the teaching of music and painting.

Gounod: Symphony No. 1: I. Allegro molto (Sinfonia Finlandia Jyväskylä; Patrick Gallois, cond.)
Ingres had very decided tastes in music for the classics: Gluck, Haydn, Mozart, and Beethoven, as befitted his own desire to impose what might be regarded as old-fashioned rules on the increasingly wild nineteenth century. In his charcoals, he captures the life of the two performers, but in his image of Cherubini, he’s capturing something of his own old-fashioned qualities.