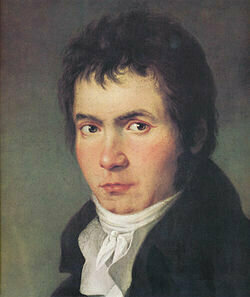 The famous “short-short-short-long” motive that initiates the opening of Beethoven’s 5th Symphony has become the most compact and commanding gesture in all of symphonic literature. Powerfully introduced by the whole orchestra in the minor mode, the module is ambiguous in key and meter, but crystal clear in its rhythmic design. Premiered on 22 December 1808 at Vienna’s “Theater an der Wien,” the literary giant E.T.A. Hoffmann was in the audience, and wrote, “Radiant beams shoot through this region’s deep night, and we become aware of gigantic shadows which, rocking back and forth, close in on us and destroy everything within us except the pain of endless longing—a longing in which every pleasure that rose up in jubilant tones sinks and succumbs, and only through this pain, which, while consuming but not destroying love, hope, and joy, tries to burst our breasts with full-voiced harmonies of all the passions, we live on and are captivated beholders of the spirits.” 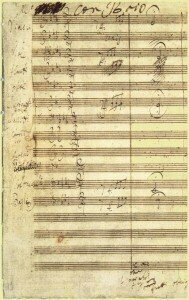 Original score of the Fifth Symphony

The Symphony quickly acquired the nickname “Schicksals-Symphony” (Symphony of Fate). It was provided by Beethoven’s assistant Anton Schindler, who remembered the following story told to him by the composer. When Beethoven realized that his hearing loss was rapidly worsening, he penned an angry letter suggesting that he would “seize Fate by the throat; it shall not bend or crush me completely.” The struggle with “Fate knocking at the door,” according to Schindler, is musically encoded in the opening module. In the event, Beethoven worked on this composition for the better part of four years. The initial musical ideas, mainly rough sketches outlining rhythmic motives, date from 1804 and seem to have been sketched immediately following the completion of his Third Symphony. Work was frequently interrupted by other compositions, but Beethoven eventually readied the work for a marathon performance, which included his Sixth Symphony. The two symphonies appeared in reverse order, with the Sixth played first and the Fifth played in the second half of the program. The Symphony is simultaneously dedicated to two of his patrons, Prince Joseph Franz von Lobkowitz and Count Razumovsky.