In Tune Arts
Musicians and Artists: Gershwin and Dove
by Maureen Buja May 5th, 2019
Tags: Gershwin 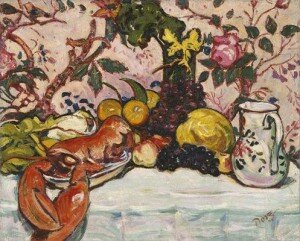 George Gershwin started on Broadway and finished on the opera stage. Along the way, he wrote the music that seemed to define the spark and light of the early American 20th century. The roaring 20s and Gershwin’s magic were brought together in three paintings by Arthur Dove (1880-1946).

Arthur Dove is considered one of America’s first abstract painters. He started his work in university, illustrating the graduation yearbook. He then went to Europe in 1907, going to Paris, the artistic centre of the new century. In Paris, he was exposed to the new styles at the end of impressionism, such as Fauvism, which were increasingly drawing away from pure representation. When he returned to New York, he became part of the Stieglitz school in New York. The photographer Alfred Stieglitz promoted modern art in America and encouraged Dove in his creation of his first abstract works. His last representational work, The Lobster, was painted before Dove left France and was shown in a 1910 exhibition at Steiglitz’ gallery. 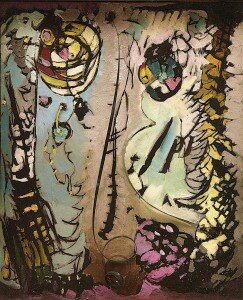 This looks purely French – even in the overly ornate wallpaper.

Rhapsody in Blue, the music, was commissioned by bandleader Paul Whiteman and Gershwin responded with a work that brought together sounds he had heard on the train to Boston, ‘its steely rhythms, the rattle-ty-bang,’ that Gershwin construed as a ‘sort of musical kaleidoscope of America – of our vast melting pot, of our unduplicated national pep, of our blues, our metropolitan madness.’ 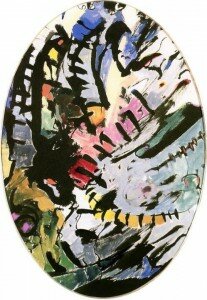 Originally entitled American Rhapsody, following the model of Liszt’s Hungarian Rhapsody, the title was changed to Rhapsody in Blue at a suggestion by George Gershwin’s brother Ira, following the model of the titles of Whistler’s paintings. It made its premiere at Paul Whiteman’s Experiment in Modern Music concert at Aeolian Hall in New York on 12 February 1924, with Gershwin as soloist. The work was an instant success and made Gershwin’s name as an American composer of serious music. For Whiteman, he played the work nearly 90 times of the next 3 years and eventually adopted it as his signature tune.

The first recording, done on one 78 rpm record, divided the work into two parts for each side of the record. In order to fit on the record, the work was cut down (the Whiteman recording, with Gershwin at the piano was just under 9 minutes; the 1942 Levant recording above is over 12 minutes; a recent Los Angeles Philharmonic recording is nearly 16 minutes). A 12-inch 78rpm recording, the size used for most classical or operatic recordings, could hold 4 to 5 minutes of music per side. To fit the music on, the recording with Gershwin at the piano is also much faster than we are now used to.

This recording was divided between the opening Allegro and Part II began with an abridged slow middle section and continued through the finale.

Dove divided his two images to reflect the division of the 78-rpm record. In Part I, Dove uses blue colour to reflect the ‘blue notes’ in the Rhapsody. Visible in the bottom center of the painting are the metal clockwork springs that Dove used to convey the ‘shrill, steely qualities’ of the work, particularly the clarinet glissando that opens the piece. 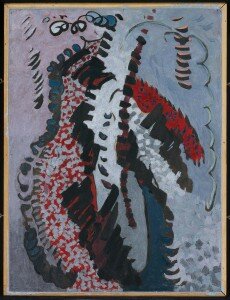 In Part II, both the slow middle section and the quick finale are represented. Fewer blue colours and more yellows, greens and metallic colours prevail. The thin lines become darker to the left, almost imitating the crescendo of the finale.

The third picture Dove did on Gershwin was based on the Act I closing number in George White’s Scandals of 1922, ‘I’ll Build a Stairway to Paradise.’ Its most memorable appearance, of course, was 30 years later in the Gershwin-homage film, Vincent Minelli’s An American in Paris. As sung by Georges Guétary, it became a show-stopping Follies number.

As the first act finale (and hit) of George White’s Scandals of 1922, Gershwin’s piece was a hit and quickly entered the jazz mainstream as a standard. Dove would have heard it as part of a different concert at Aeolian, sung by Eva Gauthier, with Gershwin at the piano.

The Hollywood version doesn’t quite capture the true jazz feeling of Whiteman’s original 1922 recording, which Dove played over and over as he painted. Gershwin described the spectacular 1922 production number: “Two circular staircases surrounded the orchestra on the stage, leading high up into theatrical paradise or the flies, which in everyday language means the ceiling. Mr. White had draped fifty of his most beautiful girls in a black patent leather material which brilliantly reflected the spotlights. A dance was staged in the song and those girls didn’t need much coaxing to do their stuff to the accompaniment of Whiteman’s music”. You can see the parallels of the beautiful chorus girls and the central staircase in Minelli’s film version.

In Dove’s painting, the stairway of the title, shown with the horizontal black ticks, carries the viewer from the dark blue and red at the bottom to the explosion of silver at the top. Festive streams convey the energy in the music.

Dove started this painting in pastels but within a week had moved to oils to better express the music in visual terms. The work was first exhibited in December 1927 in Stieglitz’ gallery. The reviewer for the New York Times, Edward Alden Jewell, later the owner of the work, said: ‘Yet even one who does not understand is caught now and then with an inexplicable and fugitive thrill before some orchestration of color and form.’