In Tune Arts
Musicians and Artists: Berlin, Whiteman, Dove and others
by Maureen Buja May 26th, 2019 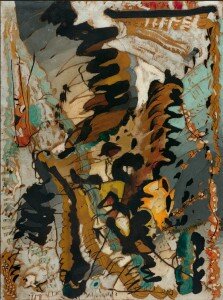 As part of his six 1927 music paintings, Arthur Dove did three on George Gershwin’s music and one on Irving Berlin’s music. The link between Dove and these six paintings was Paul Whiteman and his Experiments in Modern Music concert in 1924 at Aeolian Hall. 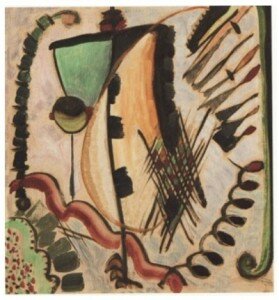 Berlin wrote ‘An Orange Grove in California’ for The Music Box Review of 1923, and it was performed at Whiteman’s Aeolian Experiments concert in 1924. Whiteman also recorded the piece, using a jazz band that included banjos along with the more standard brass and percussion. The overall quality of the work is much rougher than we generally associate with Whiteman’s later recordings.

Given the music’s title, it’s not surprising to find that the principal colour used is orange, but at the same time, the ripples and zigzag motions give us the life and rhythm of the music. You could also read the brassy quality of Whiteman’s recording into the orange and yellow colours of the painting. 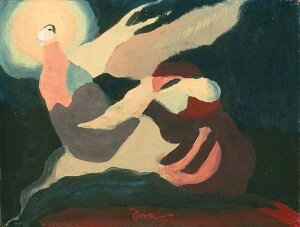 The 6 music paintings of 1927 also included Rhythm Rag, based on the Paul Whiteman recording of the same name, and Improvisation, which also has a musical echo, although not directly attributable to any one piece of music. The current location of Rhythm Rag is unknown.

Rhythm Rag was recorded by Whiteman in 1925, with his typical brassy sound. Whiteman sought to codify improvisation, which to many jazz players was the heart of the musical style. To one jazz player, Whiteman’s efforts to regulate or orchestrate was akin to trying ‘to make a lady’ out of a wild outsider music.

These were not the only paintings that Arthur Dove did with music as the inspiration. Between 1913 and 1944, he did some 17 paintings based on music. Two other works, “The Moon Was Laughing At Me” (1937) and “Me and the Moon” (1937) were part of what he called his “Radio Collection,” based on recordings he’d heard on the radio. 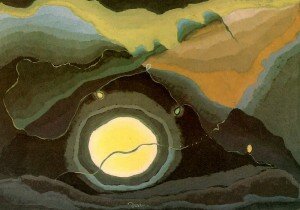 The music that Dove had heard on the radio was by the Mills Blue Rhythm Band and was actually entitled “The Moon is Grinning at Me.” The lyrics are about a man complaining that it was the moon that caused him to fall in love with someone unfaithful and it’s now laughing at him. The moon in the painting is broken in half, just as his heart was.

The second painting, “Me and the Moon,” was based on the song of the same name recorded by Hal Kemp and his Orchestra. A slower song, it tells the story of searching, with the help of the moon, for a lost lover.

The first of the radio works was written while Dove’s wife, the modernist painter Helen ‘Reds’ Torr, was away on a family emergency. What was supposed to be a stay of 2 weeks extended for 3 months, the longest time the couple had been separated. The second work was painted after her return. Dove clearly found in the lyrics something that represented his own feelings of loss.