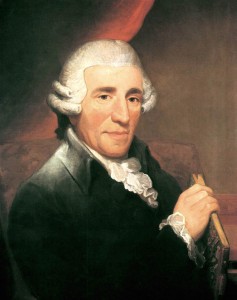 Joseph Haydn has entered music history as a jovial, grandfatherly figure with a reputation for a quick wit. Generations later, we still chuckle at the stories behind the Surprise Symphony or the Farewell Symphony. His famous good humor is all the more striking considering his often difficult upbringing.

Joseph Haydn was born in the little town of Rohrau, Austria, on 31 March 1732, the second of twelve children. His father Mathias was a wheelwright by day and a folk musician by night. He was especially fond of accompanying himself on the harp singing folk tunes, and he would often encourage his family to sing along with him.

It’s no surprise that Joseph’s talent blossomed in this idyllic, naturally musical environment. That talent would soon change his life forever. When he was six, a distant relative named Johann Matthias Frankh visited Rohrau. Frankh was a schoolmaster and choirmaster in the town of Hainburg, and he thought that Joseph would do well to become his apprentice. Joseph’s parents hoped that such training would assist Joseph in becoming a clergyman, and so they agreed to send him away. Accordingly, Joseph Haydn left home at the age of six.

The Frankh family didn’t take very good care of their brilliant new charge. He frequently went hungry and he was beaten regularly. Later in life, he remembered being embarrassed at the dirty clothing the Frankhs forced him to wear. Nevertheless, he learned the basics of music: how to play the violin and harpsichord, and, more importantly for his immediate future, how to sing.

In 1739, not long after Joseph had arrived at the Frankh house, an important musician named Georg von Reutter came to town. Reutter was the director of music at St. Stephen’s Cathedral in Vienna, and he was on a tour of the smaller Austrian cities, scouting out new talent for his cathedral choirs. (A steady supply of boys was needed, since every year a certain percentage of their high voices fell victim to puberty.) During this scouting trip, Reutter heard Haydn and was deeply impressed, offering him a position as a chorister. In the spring of 1740, Joseph made his second big move, arriving in Vienna at the age of eight. 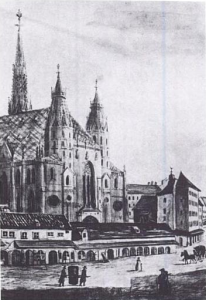 He worked for nearly a decade at the cathedral as a chorister. He was steeped in church music, but he didn’t receive the systematic training in theory and composition that he craved. He eventually resorted to asking his father for money to buy the famous textbook Gradus ad Parnassum so that he could start to teach himself. He also still struggled to get enough to eat. But if he sang well enough, he was invited to perform at aristocratic parties, where he was fed.

By 1749, Haydn’s voice was starting to break. Apparently the Empress herself referred to his singing as “crowing.” Joseph didn’t help matters when he jokingly snipped off the pigtail of a fellow chorister. Ruetter threatened to cane Haydn for his insubordination. Haydn replied that he’d rather leave the choir than be so humiliated. Ruetter replied, “Of course you will be expelled…after you have been caned.”

So it was that a teenaged Joseph Haydn found himself humiliated, fired, and homeless. Luckily an acquaintance named Johann Michael Spangler invited the young genius to share (cramped) quarters with him, his wife, and baby son. His lodging secured, Haydn started working as a freelance musician, finally gaining a certain level of control over his life after years of lonely nights, tiny meals, and hard teachers.

Haydn was clearly more than a great composer or a quick wit. He was a survivor.