To prepare for the birth of her sixth child, Constanze Mozart visited a local spa in 1791. Located near Vienna, the small town of Baden had since medieval times provided relaxation and cures for Austria’s ruling families. Constanze certainly needed a bit of relaxation as she was suffering from a rather severe foot infection. Her husband, Wolfgang Amadeus Mozart meanwhile, remained in Vienna to continue his work on the Magic Flute. 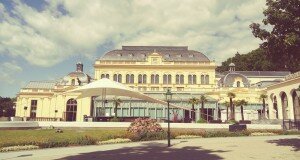 For the Christian feast of “Corpus Christi”—celebrated on Thursday after Trinity Sunday—Wolfgang, however, did manage to visit his wife in Baden, and in great anticipation he writes, “At five o’clock tomorrow morning, we are all driving out, and so between nine and ten I expect to find in your arms all the joy which only a man can feel who loves his wife as I do!” Once he arrived, Mozart happily composed a remarkably short and simple setting for mixed choir, string ensemble and organ continuo; the Eucharistic hymn Ave verum corpus (Hail, true body).

Professional obligations forced him to return to Vienna, and Mozart was obsessed with fear that his pregnant wife might slip in the baths and fall. And he truly missed his wife. On 7 July 1791 he writes, “You cannot imagine how I have been aching for you all this long while. I can’t describe what I have been feeling – a kind of emptiness, which hurts me dreadfully – a kind of longing, which is never satisfied, which never ceases, and which persists, nay rather increases daily. When I think how merry we were at Baden—like children—and what sad, weary hours I am spending here! Even my work gives me no pleasure, because I am accustomed to stop working now and then and exchange a few words with you. Alas! This pleasure is no longer possible.” Mozart did describe Constanze as “lacking in wit,” but he also credited her with “plenty of common sense and the kindest heart in the world.” His letters are full of affection, and despite increasingly strained finances, he remained ever optimistic about the things that really mattered to him.