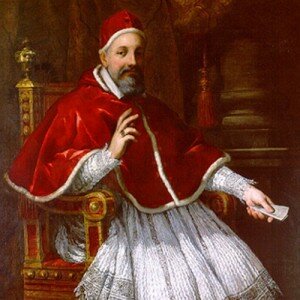 The signs of greatness can include many things, but being crowned by Apollo, the god of music and the arts (among many other attributes), is a definite signal.

Marc’Antonio Pasqualini (1614-1691) was a celebrated male soprano from Rome, first singing at the French national church in Rome, S. Luigi dei Francesi, before being sent to the Sistine Chapel choir by his patron Cardinal Antonio Barberini. Barberini, and his brothers, Francesco and Taddeo, formed a powerful triumvirate shaping the culture, politics, and religion of 17th century Italy. His uncle was Pope Urban VIII (Maffeo Barberini) and that association made Antonio Barberini very wealthy. 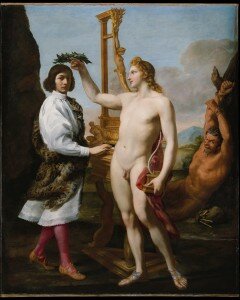 In addition to his duties as a singer at the Vatican, Pasqualini was also on the Roman opera stage. His patron Barberini put on many opera productions and Pasqualini appeared in them, usually in the role of an unhappy character, generally a woman disguised as a man. This gave him the opportunity for long emotional or vengeful soliloquies.

Pasqualini: Sta forte mio core (Rebecca Choate Beasley, soprano
Lyle Nordstrom, lute)
As a composer, he used the example of the composers of the music he sang. The books of music in his own hand are at the Vatican Library and include a wide variety of both secular and sacred vocal music. He was also known for taking older works by other composers and rewriting them with new lyrics. 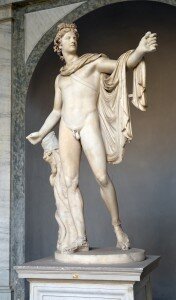 As a singer in the Barberini operas, he got a reputation not only for vocal brilliance but also for arrogance. The Roman artist, Andrea Sacchi, captured the brilliance and reputation of Pasqualini in a wonderfully allegorical picture, Marc’Antonio Pasqualini Crowned by Apollo. The painting dates from 1640, after Pasqualini’s recent appearance in La Passia d’Orlando and a 1639 performance of Marazzoli’s Chi soffre speri, which had intermedi designed by Bernini where he created a magnificent scene of a bustling country fair, with passing carriages, a sunrise and a sunset.

Marazzoli: Chi soffre speri: Sinfonia e Balli (Ensemble Mare Nostrum; Andrea de Carlo, cond.)
To understand this picture, we have to go back to the stories of the Greek gods. Marsyas, a satyr, a wild creature with the ears and tails of a horse, challenged Apollo to a musical contest. Historically, Marsyas played the aulos, a kind of flute, but in this picture, he’s shown competing on the bagpipes. When Marsyas played, the audience was put into a frenzy and danced wildly. Apollo, on the other hand, played his lute and its beauty brought tears to the eyes of the listeners. This was a draw. In their next contest, Marsyas lost and was condemned to be flayed.

In this picture, we see Apollo, holding his lyre, awarding the laurel crown of victory to Paqualini, with the defeated Marsyas awaiting his fate in the background, bagpipes at his side.

The pose adopted by Apollo echoes that of the 2nd century statue Apollo Belvedere, considered one of the greatest ancient sculptures. 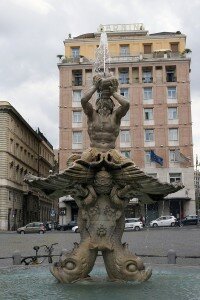 The instrument played by Pasqualini is very unusual – it’s a kind of keyed harp, with a keyboard. The instrument is known as a clavicytherium and is very rare but there was such an instrument in the Barberini collection. The table on which it sits, with its three dolphin legs, recalls Bernini’s Triton Fountain that sits outside the Palazzo Barberini.

It is not known who commissioned this work, but it does not show up in the Barberini expense books. It is now thought that it might be Pasquini himself (remember that arrogance above?) who commissioned the work from his friend to give to his patron.

Pope Urban VIII died in 1644 and he was succeeded by Pope Innocent X (Giovanni Battista Pamphili) an enemy of the Barberini family. Upon his succession, he started a prosecution against the Barberini for misappropriation of public funds. The Barberini brothers fled to Paris and Pasqualini’s last opera performance for them was in Paris in Luigi Rossi’s Orfeo in 1647.

Sacchi’s portrait was a rare one for the time, as singers, let alone castrato singers, were rarely the subjects of portraits, let alone a full-length one. However, this portrait gives us glimpse into the highest level of Baroque society in Rome and of the money, the power, and the hubris that created a world that its successors could no longer afford.