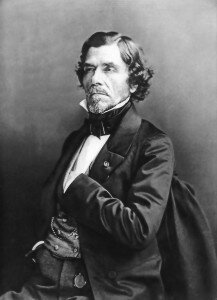 In a sense, Chopin (1810-1849) occupied two worlds. In Poland, he was Fryderyk Franciszek Chopin of Warsaw. And, after age 21, when he had settled in Paris, he was Frédéric François Chopin. This Polish/European duality drove his life.

One of the most famous paintings of Chopin was done by his friend Eugène Delacroix in 1838. It was originally a double portrait of Chopin at the piano while his lover, the writer George Sand, sat to his right, listening and doing needlework, one of her favourite activities. This is one of the few portraits painted by Delacroix, who was better known for his large-scale works and for his lithographic illustration of the works of Shakespeare, Sir Walter Scott, and Goethe. 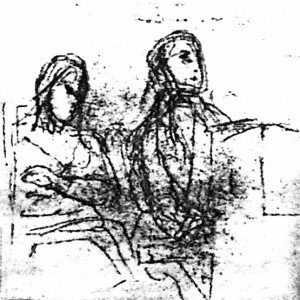 Chopin: Ballade No. 2 in F Major, Op. 38 (Idil Biret, piano)
Chopin was the consummate virtuoso pianist of the Romantic era. In keeping with his skills at the piano, his skills as a composer made many of his works deemed ‘unplayable’ by those with lesser talents. He left Warsaw at age 20, settling in Paris at age 21 where he gave rare public concerts and taught extensively. During his years in Paris he was to become acquainted with a wide range of composers, performers, and writers, including Hector Berlioz, Franz Liszt, Ferdinand Hiller, Heinrich Heine, and Eugène Delacroix. Chopin met the writer George Sand in 1836, while he was pursuing his long-time love Maria Wodzińska. By early 1837, however, Maria Wodzińska’s mother forbad the courtship, based on his poor health and his association with women such as Sand. By the end of June 1838, he and Sand were lovers and seem to have moved rapidly from mutual distain to a kind of dazed recognition of their attraction. It was at this time that Delacoix, who not only knew Chopin but also Sand, did the famous painting. 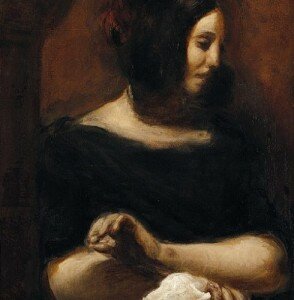 Chopin: Impromptu No. 1 in A-Flat Major, Op. 29 (Wilhelm Kempff, piano)
The preliminary sketch shows each sitter in a slightly different position than in the final – Chopin’s head is tipped back and Sand sits very close to him.

Until the death of Delacroix in 1863, the unfinished double portrait was in his studio. After his death, sometime between 1863 and 1874, however, the then-owner of the picture cut it in half, believing it to have greater value if focused solely on each subject. The image of George Sand shows her lost in reverie, with her needlework stilled. 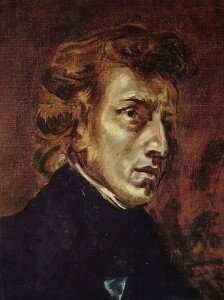 The image of Chopin, silhouetted against a background of a dark wall, gives us the ultimate Romantic hero – talented and doomed to an early death.

When the image was cut in two, the focus on the two subjects meant that a great deal of other material was cut away. A modern collector had both images ‘reassembled’ as a painting, using the 1837 preliminary sketch as its basis. 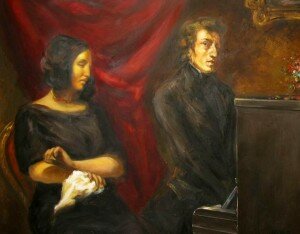 Chopin: Mazurka No. 18 in C Minor, Op. 30, No. 1 (Vladimir Ashkenazy, piano)
Delcroix visited Chopin during his summer stay at Sand’s estate at Nohant and gives an account of staying in a letter of 7 June 1842:

The hosts could not be more pleasant in entertaining me. When we are not all together at dinner, lunch, playing billiards, or walking, each of us stays in his room, reading or lounging around on a couch. Sometimes, through the window which opens on the garden, a gust of music wafts up from Chopin at work. All this mingles with the songs of nightingales and the fragrance of roses.

At Chopin’s death in 1849, the pallbearers included Delacroix and Camille Pleyel, who had made Chopin’s pianos and whom Chopin had made famous by his playing of them.