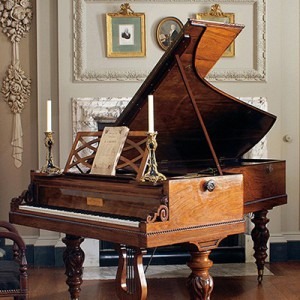 The Alex Cobbe collection in England is the largest collection of composers’ piano in the world. Three of the most important pieces of the collection are the pianos owned by Chopin, each of which was used during the final year of his life and show the different sides of the composer, performer and teacher.

London held a fascination for Chopin and in April 1848, he thought seriously of settling there. In his house at 48 Dover Street, his drawing room held three pianos, one each by the leading French and English makers of his day: Camille Pleyel, Pierre Erard, and John Fowler Broadwood. He mentions these pianos with pride in more than one of his letters. Describing his house to a friend in Paris in June 1848, he mentions:

I give a few lessons at home. I have a few engagements to play at fashionable drawing-rooms… It is true that I am in one of the finest districts in London. I have a large drawing-room with three pianos a Pleyel, a Broadwood and an Erard. 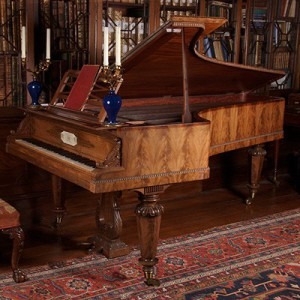 Chopin: Preludes No. 7 in A major and No. 8 in F sharp minor

He bought the Pleyel piano in Paris in January 1848, having chosen it personally shortly after it was made. In February 1848, he gave his last concert in Paris on it and then brought it with him to England. He is rumoured to have even slept in his lodgings with the instrument in its packing case before he found his London house.

The Erard piano in the Cobbe collection was made in London and actually belonged to Chopin’s pupil Jane Stirling. It was made in 1843, which was probably the same year that Chopin became her teacher. He taught her on an almost daily basis no matter where he was: Paris, London or Scotland, using this piano. When he was staying with the Stirlings in Scotland, the piano was placed in his private sitting room, where it remained until modern times. The Stirlings were financial supporters of his English sojourn and continued to support him when he returned to Paris. 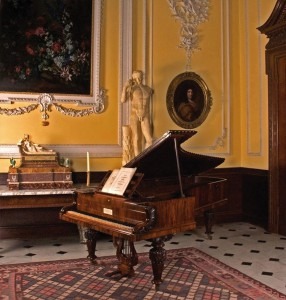 The other pianos he used in England included a Broadwood concert grand. This was a different one than he used at home. He chose it from the piano maker’s warehouse and it was stored with Broadwood and then moved to the concert venues. Many of his London and Manchester concerts were performed on this piano and it was used for his concert on 16 November 1848 at the Guildhall, London, which was to be his last public performance. This performance was for the benefit of Polish refugees and he was clearly ill, now weighing less than 99 pounds.

Chopin’s trip to England was one of the highlights of his life as a performer. He was playing for people who understood his music, were quiet and attentive at his concerts, and gave him an appreciation far different than he had in Paris. In fact, he performed twice as many concerts in the first 2 months he was in London than he had done in 10 years in Paris. He never performed in Paris again after his time in England. He died in 1849 in Paris, probably of tuberculosis.

Take a look at The Cobbe Collection.