The piano has undergone all sorts of innovations and embellishments since its invention by Bartolomeo Cristofori in the early 1700s. The most significant advances in the piano’s design were in response to demands from pianists and composers for a sturdier instrument with a more powerful, resonant sound. With the Industrial Revolution came the technology to make high-quality wire for the strings and a cast iron frame, enabling piano makers to build bigger, stronger and louder instruments. By the end of the nineteenth century, the piano’s design was standardised and differed little from today’s modern instruments. 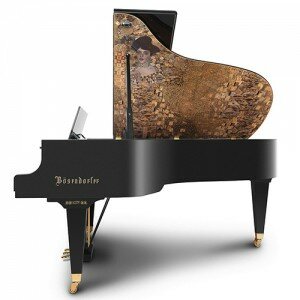 Think of a modern grand piano and one normally visualises an instrument with a black shiny case, but piano makers and designers have been creating instruments with unusual cases and decoration since the piano was first invented. While the case of a modern instrument is usually made from lacquered black mahogany, other woods such as rosewood, walnut and bird’s eye maple are also used, making the piano not just a musical instrument but also a very attractive piece of furniture. Music desks were carved too, sometimes quite elaborately. (My own 1913 Bechstein Model A has a rosewood case and a fretwork music desk.) Marquetry or inlays of wood, mother-of-pearl or tortoisehell, paint effects, gilding and ormolu are used to enhance the case, and in many instances, the style of the case indicates the date of the instrument. In the 1930s, piano makers responded to the prevailing Art Deco style, creating instruments whose cases reflected the strong geometric styling found in furniture design of the time. 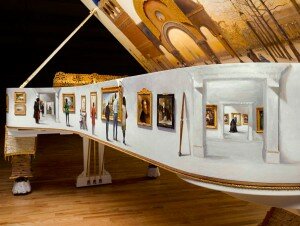 “Pictures at an Exhibition” by Steinway

Today leading piano makers such as Steinway, Blüthner and Bösendorfer all produce limited edition ‘art case’ pianos. Steinway’s ‘Pictures at an Exhibition’ grand piano was unveiled in 2017, inspired by Modest Mussorgsky’s best known work. It is Steinway’s first art case piano inspired by an actual composition and took four years to create. It has a gold and white ‘Russian imperial’ colour palette and the case depicts a modern visit to an art gallery. The legs represent Baba Yaga’s hut and the stool is modelled on the Great Gate of Kiev, which is also depicted on the inside of the lid. Other details on the case are picked out in 24-carat gold leaf. Unsurprisingly, given the amount of detail and craftsmanship, this piano is a one-off. 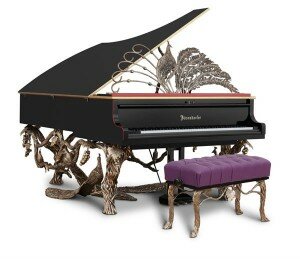 Bösendorfer’s limited edition ‘Klimt’ piano is inspired by the Austrian Art Nouveau artist Gustav Klimt, who lived and worked in Vienna, where Bösendorfer is also based. Created in 2012 to celebrate the 150th anniversary of the artist’s birth, the lid contains a reproduction of Klimt’s portrait of ‘the woman in gold’, Adele Bloch. It was the first of Bösendorfer’s ‘Artist Series’ pianos, Klimt’s famous painting The Kiss also adorns a Bösendorfer, and like the woman in gold, is embellished with real gold leaf. Bösendorfer have also produced a ‘Jean Cocteau’ white piano, celebrating the life and work of the French writer, designer, playwright, artist and filmmaker Jean Cocteau, who knew Satie and Stravinsky, and the Grand Bohemian piano, created in collaboration with Italian artist/designer Franco Castelluccio and entrepreneur and hotel magnate Richard Kessler. The piano’s opulent design was inspired by Kessler’s own collection of paintings and sculptures, and has a majestic peacock for a music stand, and a bronze cast base of sculpted tree branches complete with mythical woodland creatures. It’s a real flight of fantasy which would look quite at home in a gallery rather than in a concert hall! 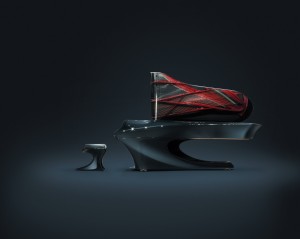 Another creative partnership celebrates the precision engineering and sleek design of Porsche, while the most unusual piano to date must be Gergely Bogányi’s futuristic ‘Bat piano’. Marking the first significant redesign of the piano since it was first invented, the Bogányi piano has a soundboard of -layered carbon-fibre with a rippled surface that is sprung and detached from the piano frame. This makes the piano resistant to exterior conditions like heat, humidity, cold, damp and dryness – all enemies of the traditional piano and especially its soundboard.

Despite their extravagant or unusual designs and the use of innovative or very expensive materials, the manufacturers of these unusual instruments ensure that they are built to the highest specifications, so that they may be played as well as admired as works of art.