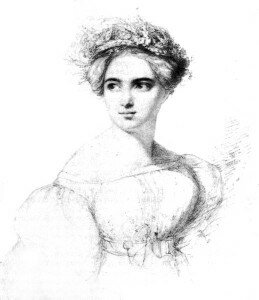 When you see ‘Mendelssohn,’ your first thought might be of Felix, but this is about Fanny Mendelssohn, Felix’s older sister.

Fanny met her future husband, Wilhelm Hensel, in 1821 when she was just 16. She was a member of one of the leading society families and he was an up-and-coming painter in Berlin. Along with his portraits, he had designed a number of tableaux vivants (living pictures) where living people portray a painted scene. 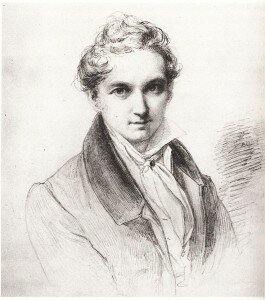 If you think this fashion is long gone, recall this scene from the musical Sunday in the Park with George which imitates Georges Seurat’s pointillist masterpiece Un dimanche après-midi à l’Île de la Grande Jatte (A Sunday Afternoon on the Island of La Grande Jatte).

By 1822, Wilhelm was courting Fanny and she was secretly setting some of his poems to music. Her parents were concerned about Hensel’s age (he was 11 years older) and the fact that his sister was a Catholic mystic. As Lutherans who had converted from Judaism, the parents could only discourage a Catholic connection, particularly as Berlin’s heavily Lutheran society was also prejudiced against Catholics.

Sunday in the Park with George (Roundabout Theatre, New York, 2008)

In 1823, Wilhelm left for a 5-year trip to Italy to study painting, and Fanny stayed in Berlin and wrote songs in place of writing letters to Wilhelm, as letter-writing was forbidden by her mother. Her songs’ subjects tended to be about distance, loss, and absence.

Wilhelm returned in October 1828 and had to work to get back into the Mendelssohn family circle, held back by both his extended absence and his complete lack of musical ability. He had his own success in his first exhibition, held at the Royal Academy of Art in Berlin, which resulted in Friedrich Wilhelm III appointing him as court painter. The appointment opened the way for his marriage. 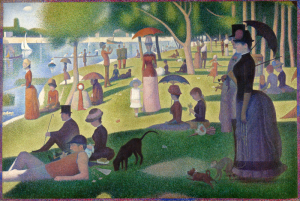 In 1829, Felix Mendelssohn started his trip to England and Scotland (which would result in works such as the Hebrides Overture) and Fanny got engaged to the new court painter. They were married on 3 October 1829, and the music played for the ceremony included her own pieces.

After their marriage, the composer and the painter set up house, with each having their own work room. Fanny continued to set Hensel’s poetry to music and dropped other poets from her repertoire. Their only child, Sebastian Ludwig Felix Hensel, named after Fanny’s three favourite composers, was born in 1830.

Despite her brother’s distance in England, they worked together, with some of her Lieder appearing under his name when he was being pressed by his publisher to give him material. Her song ‘Die Nonne,’ for example appeared as no. 12 in Felix Mendelssohn’s Op. 9 song collection. Her pieces also appear as no. 7 and 10 in that collection. 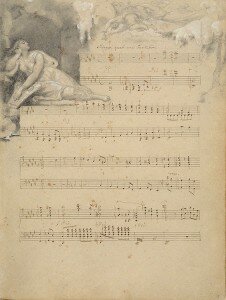 Mendelssohn-Hensel: Die Nonne (Juliane Baird, soprano; Keith Weber, piano)
In 1831, she started a Sunday music get-together, her Sonntagsmusiken, which became a popular invitation-only concert series – it is reported that up to 200 people would attend, including the Prussian nobles of Berlin, and performers would include people such as Clara Schumann and Franz Liszt, as well as Fanny herself.

Finally in 1839, she finally got to go to Italy. She and Wilhelm visited Milan, Venice, Florence, and Rome, where she benefitted not only from her brother’s reputation but also her own musical talents. The composers in Rome looked to her to tell them what they should know about German music and she was admired as she never had been before as both a pianist and a composer. After 6 months in Rome, the Hensels travelled on to Naples, before heading north to Milan and back home, arriving a year after their departure. 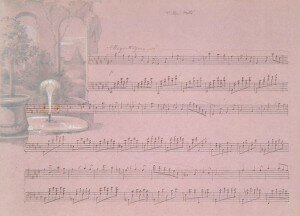 In 1841, Fanny had a very productive year, including her piano cycle Das Jahr. This set of 13 piano pieces (one for each month of the year plus one) was written on coloured paper and illustrated by her husband.

Another collection the couple worked on next, the Reisealbum, put their trip to Italy into words, music, and illustration. 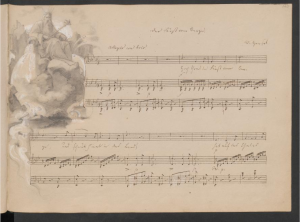 Mendelssohn-Hensel: Der Fürst vom Berge (David Jagodic, tenor; Ana Markovi‎‎‎ć, piano)
The Hensels continued on in their life, Wilhelm painting and Fanny composing, although very little of her music was published in her lifetime under her name. The family took another trip to Italy in 1845, staying with friends in Florence before travelling down to Rome, where Wilhelm was already resident. Music of Fanny’s musical life revolved around her brother’s music productions, such as the 1845 performance of Felix’s Oedipus at Colonos in Berlin. It was at one of her Sonntagsmusiken (14 May 1847), when she was rehearsing one of Felix’s works, that she was felled by a stroke, dying that same evening. News of her death caused a nervous breakdown in her brother and he died a mere 5 months later, also from a stroke. 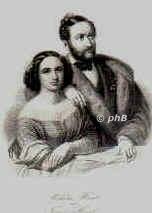 The day before her death, Fanny wrote her last song, ‘Bergeslust,’ a setting of a poem by Eichendorff. The final line of the poem, ‘Our fantasies as well as our songs rise up until they reach heaven’ (‘Gedanken gehn und Lieder fort bis ins Himmelreich’) and the music is engraved on her tombstone.

Mendelssohn-Hensel: 5 Lieder, Op. 10: No. 5. Bergeslust (Dorothea Craxton, soprano; Babette Dorn, piano)
Wilhelm and Fanny occupied overlapping artistic spheres, not separate ones. She set his poetry and he illustrated her works. Mid-nineteenth century society and marriage were dual obstacles to Fanny having her own career. Her brother’s lack of encouragement also held her back. Nonetheless, she continued to compose until to the end.