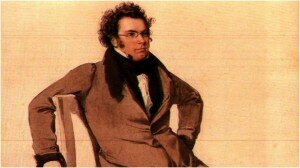 The musical Fantasy (or Fantasia or Fantasie) has its roots in improvisation and rarely follows a strict musical structure (such as Sonata or Ternary form). In this respect the Fantasy is related to the Impromptu (a genre favoured by Schubert). The term was first applied to music in the 16th century and suggested an imaginative musical idea rather than a specific compositional structure. The Fantasia became popular in the Baroque period, its form offering scope for free invention and musical imagination with alternating sections of differently textured music – demanding toccata-like/virtuosic passages, slow recitative often embellished with many ornaments, improvisation, free modulation, deceptive cadences or fermata, and varied characters and mood. In a typical Fantasy, the composer sets out a theme at the opening, or near the beginning, and the remainder of the music is a musing or musings on the theme, full of drama, imagination and expression.

The “Wanderer” fantasy – one of Schubert’s most well-known and frequently performed works, and one of the greatest pieces in the entire piano repertoire – takes the fantasy form to another place, developing an idea (it is based on one of his own songs) to create a substantial work in four sections (or one long movement), linked by a unifying theme on which all four movements are based. Structurally, the Wanderer is akin to traditional sonata form: the first section sets out of the main theme (an “exposition” as it were), the second, “slow movement” section acts as a development, the third section – a scherzo and trio – is the recapitulation; and the final section acts as a coda, which reinforces the tonic (C). Throughout the work, thematic and rhythmical “cross-references” create a sense of unity between the sections (a device Schubert was to use again in his late piano sonatas). The final Allegro section is unquestionably a “finale”, containing the most obviously virtuosic music of the entire work and exploiting the full sonic range of the instrument (for an interesting exploration of this “sonic range”, I recommend Alexander Melnikov’s 2018 recording of the Wanderer on an 1820’s Alois Graff fortepiano).

Alexander Melnikov plays the Wanderer Fantasy
But the Wanderer breaks free of classical disciplines in that it is designed to be performed without a break between the sections. In addition, the repetition and gradual variation of motivic elements, the daring use of harmonies and “remote” keys, the bold symphonic sweep of this work, and its dramatic power and emotional tension mark Schubert as a “romantic progressive” whose influence was clear in the works, for example, of Liszt (his B-minor Sonata and E-flat Concerto) and Richard Strauss (symphonic poems). The principal challenge for the pianist, in addition to the learning and upkeep of all those notes, lies in maintaining a unifying narrative thread and an underlying sense of forward propulsion throughout the whole work. 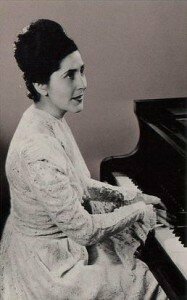 Schubert’s earlier, rarely-performed ‘Grazer’ fantasy, also in C, is closer to the Baroque and Classical model, yet it laid the foundations for the Wanderer and the later Fantasie in F minor for piano four-hands, D940. The provenance of this work is disputed (a copy whose title page was written by Schubert’s friend Joseph Huttenbrenner was discovered in the 1960s in the Graz estate of Rudolph von Weis-Ostborn). It is thought to have been composed around 1818 and as no autograph exists, its authenticity is still in doubt. However, there are clear “Schubertian” elements which closely resemble other works by Schubert, such scalic and chromatic runs, Polonaise rhythms, the mercurial emotional landscape of the work and varied colourings, and, perhaps most obviously, the beautiful Bel Canto opening melody, fragments of which recur throughout the work in different guises and keys – a device which is also used in the Wanderer and the D940. The lyrical opening theme is fully reiterated at the end, dissolving into a gentle cadence of quiet nostalgia, which in itself looks forward to the hushed, plaintive ending of the Fantasy in F minor, D940.

The most unexpected transition in the Grazer Fantasy occurs at bar 55: after the beautiful opening section – a simple but highly lyrical melody in octaves in the right hand over an extended Alberti bass which fades into a delicate pianissimo passage – a fermata following a brief descending chromatic scale signals the change. What is so magical is the shift to F-sharp major and the Alla Pollaca (polonaise) section, which despite the quiet dynamic range, is sprightly and bright in mood. This is followed by the first of several startlingly dramatic passages before the Polonaise returns. These seemingly casual, almost improvisatory, yet highly virtuosic sections employ devices found in Mozart’s keyboard fantasies such as chromatic passages in widely contrasting registers and arpeggiated figures in the left hand. Rather than linking sections, they feel more like virtuoso interludes, redolent of similar passages in particular in Mozart’s Fantasy in C minor, K475, and they create a continual sense of restlessness and drama, only briefly relieved by the fragmentary return of the opening melody. Calm is restored in bar 281 with the restatement of the opening theme, lightly embellished with runs and trills.

In the Grazer Fantasy Schubert finds much of emotional depth, expression and changes of mood, which he was later to put to even greater effect and intensity in the F-minor Fantasie for four hands, D940.

Rarely performed today (I have never heard this work in concert myself), the Grazer Fantasy was given its premiere by Lili Kraus shortly after it was discovered, and subsequently recorded by her (Odyssey, 1970). Other notable recordings include Michael Endres (Oehms, 2009) and Paul Berkowitz (Meridian, 2017). The score is published by Barenreiter.