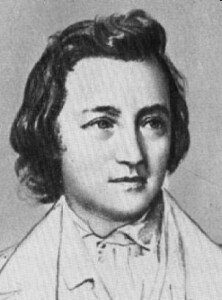 Musical settings of Heinrich Heine’s poetry must number in the thousands! An intricate response to the charged political environment of his day, not to mention his own turbulent life, Heine was able to create distinct emotions in his poetry. As Friedrich Nietzsche wrote, “Heinrich Heine has given me the highest idea of what a lyric poet is. I have been searching in vain through all the thousands of years for an equally sweet and passionate music. He possessed that divine malice without which I can’t imagine the perfect. And how Heine handles the German language!” The most popular settings of Heine can easily be ascribed to Robert Schumann’s Liederkreis Op. 24 and Dichterliebe (A Poet’s Love) op. 48. Yet surprisingly, Heine avoided any public approval of the Schumann settings. 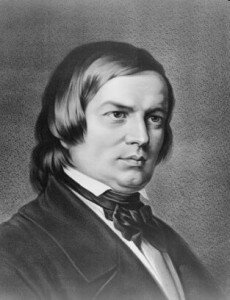 Schumann and Heine only met in person once in Munich, on 8 May 1828. Schumann was a young student traveling during summer holidays with his friend Rosen, prior to starting his law studies at the University of Leipzig. Heine, on the other hand, had applied for a professorship at the University of Munich, but was sorely disappointed when his application was denied. The actor Carl Krahe introduced Schumann to Heine, and Schumann writes, “I imagined him to be a crotchety, misanthropic man, who would be more likely to stand, as if too sublime, above mankind, than to huddle against it. But how different I found him and how different he was, than I had conceived him to be. He engaged me in a friendly fashion, like a humane Greek Anacreon, shook my hand cordially, and took me around Munich for several hours; there lay only upon his mouth not a bitter, ironic smile, but a lofty smile over the trivialities of life and a scorn for the petty person, which made his conversation very pleasing to me.”

Robert Schumann: Dichterliebe, Op. 48 “Aus alten Märchen winkt es” (From ancient tales it beckons)
Schumann and Heine did not stay in touch, and in May 1840—his year of Lieder—Schumann wrote to Heine in Paris and enclosed several settings of Heine’s poetry. Schumann was clearly looking for a favorable public endorsement and a possible closer collaboration with the poet, but Heine never responded. Schumann was offended, and although he continued to read Heine’s new works, he grew increasingly disgusted by what he perceived “as the excessively personal and often depreciative nature of the poetry.” Given Heine’s complex personality we can only speculate as to why he did not respond to Schumann’s musical settings. However, Heine was clearly capable of praising musical settings of his poetry, as was the case with his acquaintance Johann Vesque von Püttlingen (1803-1883), who set 137 of his poems to music. Vesque was a gifted tenor, an extraordinary linguist, and one of the most successful lawyers of the period who published the definitive book on Austrian copyright in 1864.

Vesque was a student of Sechter and Moscheles, and he wrote his early songs under the name “Johann von Hoven,” with critics claiming that he was only “half a Beethoven.” Through his own vocal teacher Michael Vogl, Vesque met Schubert in 1827 and on various occasions he was invited to observe how Schubert and Vogl tried out new songs. In the event, Vesque dedicated a substantial part of his life to music and wrote roughly 330 songs, 20 vocal quartets and at least five operas—including a “Turandot”—produced in Vienna, Leipzig, and Weimar. He was personally acquainted with Mendelssohn, Liszt, Berlioz and Loewe, and met Schumann in 1838/39 and subsequently in 1846. Unlike the Schumann-Heine settings, Vesque avoids complicated harmonic progressions, opting instead for a straightforward harmonic unfolding. This gives his musical settings a sense of ease and simplicity, providing an uncomplicated interpretation of love, a serene musical counterpoint to Heine’s ironic poetry.