In Tune Arts
The Music of Poetry
Heinrich Heine “I Bear No Grudge”
by Georg Predota February 2nd, 2020 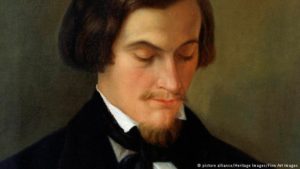 Irony is frequently considered an intellectual literary device that should by its nature be unsuitable for music. Yet, as music and literature unite in the art song, irony becomes a matter of importance in music as well. And that’s especially true when dealing with settings of that most ironic of poets, Heinrich Heine. His poetry offers a glittering play of surfaces and ironic allusions, and it encompasses a range of registers from the sublime to the ridiculous. Let’s have a look at his “I bear no grudge,” a favorite with composers far and wide, old and new. You only have to listen to the piano madly pounding away in the accompaniment to Schumann’s setting to understand the emotional turmoil and the sense of irony is elevated to the level of sarcasm.

I bear no grudge, although my heart is breaking,
Love lost to me forever, I bear no grudge.
You are radiant with diamonds in your splendor,
there falls no light into the darkness of your heart.

I knew this long ago. I saw you, yes, in a dream,
And saw the night that’s come within your heart’s chamber,
And saw the serpent that is gnawing at your heart,
I saw, my love, how wretched you really are. 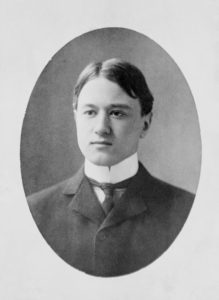 You might be surprised to know that Charles Ives (1874-1954) set music to Heine’s “Ich grolle nicht” as an undergraduate student at Yale. He subsequently had to defend himself against severe criticism of having put music to texts of songs that are masterpieces of great composers. He writes, “The song above and some others were written primarily as studies. It should be unnecessary to say that they were not composed in the spirit of competition; neither Schumann, Brahms, nor Franz will be the one to suffer by a comparison. Moreover, they would probably be the last to claim a monopoly of anything, especially the right of man to the pleasure of trying to express in music whatever he wants to.” Written as a study, his setting avoids grand emotional or musical gestures, yet the speaker’s progression from recognizing the fact of losing his love to lamenting is underscored by abrupt and thoroughly modern harmonic changes. 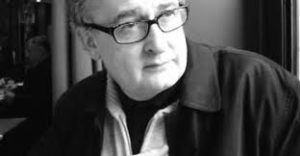 Thomas Jennefelt, who studied composition at the Royal College of Music in Stockholm, had garnered international popularity with his choral compositions. Imbued with melodic lyricism, Jennefelt presents a profusion of choral color underpinned by a regular pulse and repetitive rhythm. Constantly striving for simplicity, he has a greater affinity with American modernism than the more rigid, stylistically conservative Central European. Symptomatically enough, his music shows no signs of sudden stylistic shifts but rather a very close reading of the poetry. And such is the case in his choral cycle Dichterliebe. Jennefelt had always been moved by Schumann’s settings, but his interpretation of Heine’s poetry replaces the Romantic idyll and irony with a desperate cry of horror and helplessness. “Ich grolle nicht” establishes a sense of fake mass cheerfulness, only to be bewailed by a self-absorbed and self-pitying duet. 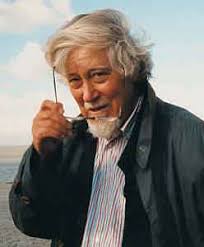 One of the reasons for Heine’s popularity among composers is his comparative lack of interest in metaphor. There is a wonderful metaphor in “Ich grolle nicht” and it depicts the snake devouring the woman’s heart. To my knowledge however, not a single composers has paid attention to that particular kind of image. Composers have been more interested in the old story that frequently things do not go well in love and life. Courtship, adoring love, disappointment, rage and self-annihilation are accompanying phenomena of intense love experiences. This never-ending progression—which Heine famously and ironically described as, “the old story that progresses from the sublime to the ridiculous” is encapsulated in “Ich grolle nicht.” It is a poem of defiance, paralyzing uncertainty and incredible pain. At least that’s how Munich-born Wilhelm Killmayer reads it, and his musical setting of this Heine poem has a decidedly expressionist slant.