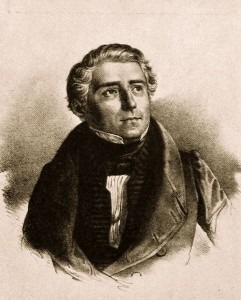 For the singing German 19th century, we tend to focus these days on Schubert and Schumann. But there were many many other lied composers and for an example we can look at Carl Loewe (1796-1869).

He was an exact contemporary of Schubert and became known for his own lieder compositions, getting the nickname the “Schubert of North Germany.” Loewe was himself an accomplished singer, even as a child. In his unbroken high soprano, he could successfully negotiate the music of the Queen of Night from Die Zauberflöte. He later developed a tenor voice and toured as a singer around Europe.

He might have had the nickname of Schubert, but his compositional skills were quite different than those of the Viennese master. Let’s look, for example, at his setting of Goethe’s dramatic set piece of Der Erlkönig. Forget you’ve ever heard this work before and listen to this setting with new ears and how Loewe gets the sense of urgency in the piano, seeming rising from a full stop to full gallop. He doesn’t treat the voices with same separation of range as Schubert does, he leaves the vocal differentiation to the performer, but he does use different kinds of musical writing for the different characters. The chord on the final ‘tot’ (dead) is something we never would have heard in Schubert. 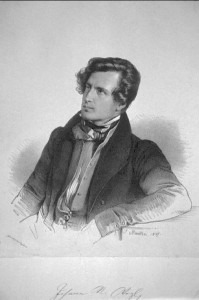 In another collection, setting the poetry of Adelbert von Chamisso, he covers the same poetry as did Schumann: Frauenliebe und –leben. Whereas Schumann only included 8 poems, Loewe sets the final poem. We don’t leave the young widow at her husband’s deathbed but take her beyond that sorrow, a reflection of her past life and happiness. We don’t end on Schumann’s sadness but on a blessing for her husband as she lays him to rest.

Loewe: Frauenliebe: No. 9. Traum der eignen Tage (Iris Vermillion, mezzo-soprano; Cord Garben, piano)
One of the song genres in which Loewe was a recognized master was the ballade – the long story song, such as Erlkönig. In a work such as Die verfallene Mühle (The Derelict Mill), we can hear how he sets the scene, changes it, and then brings us back again. An old duke is riding through the forest and comes upon an abandoned mill. He sits on a bench and dreams, imagining the mill when it was working. We’ll hear the music change to illustrate the working mill, the miller, and his charming daughter. But, too soon, the dream vanishes and the old duke rides on, brushing away a tear for the lost past. The poet here is Johann Nepomuk Vogl (1802-1866), an Austrian writer and poet. Little is known about his life but he wrote hundreds of poems and ballads, as well as dramas and works of prose.