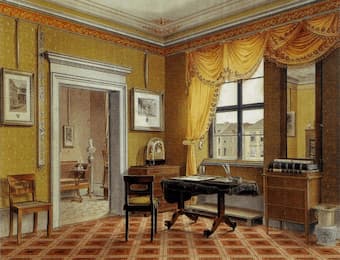 In the early 19th century, the term “Humoreske” started to appear in popular periodicals. This period of history, known as Biedermeier in Central Europe, saw a great flourishing of artistic styles in literature, music, the visual arts and interior design. The “Humoreske” essentially identified a literary sketch. That particular title was apparently derived from the Latin word humor, but used in a medieval sense. “It was originally not humorous in the modern sense of the word but pertained to human disposition.” Specifically, it portrayed the fragility and contradictory nature of the human condition. This concept found its way into music criticism as a literary metaphor. 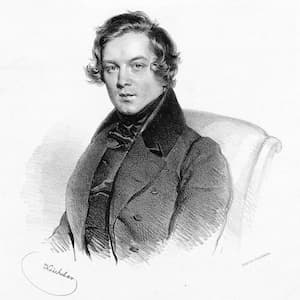 In a review from 25 December 1838, Schumann’s colleague Oswald Lorenz described Clara Wieck’s Scherzo Op. 10 “as being humoresque,” with clear reference to the literary genre. Simultaneously, an anonymous article reported on Robert Schumann’s stay in Vienna and described the piano pieces he had so far published as “brilliant musical humoresques.” When Robert Schumann first used the term as a musical title—and he was the first composer to do so—he surely had the literary genre in mind. It is no surprise that his Op. 20 “Humoreske” is an extended work for piano solo in five contrasted sections. As if in a kaleidoscope, “Schumann juxtaposes the most diverse elements of form and moods.” 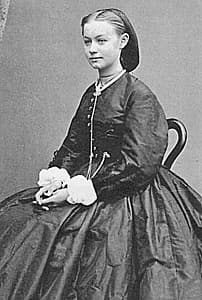 Schumann also titled the second of his Phantasiestücke for piano, violin and cello Op. 88 “Humoreske.” Later composers apparently lost or ignored this close connection to literature, and focused on humor in the modern sense of the word. The Humoresque became more formal and involved short tunes subjected to frequent repetitions. As scholars have suggested, “the style is not unlike that of a brief scherzo but it is less grotesque, more melodious, and characterized by fanciful humor in the sense of mood.” That being said, we decided to sample a cross section of Humoresque compositions starting with Agathe Backer Grøndahl (1847–1907). She took piano lessons with Hans von Bülow in Florence and with Franz Liszt in Weimar, and she composed well over 400 songs and piano pieces. Among them a delightful Humoresque gushing with “natural charm and vitality.” 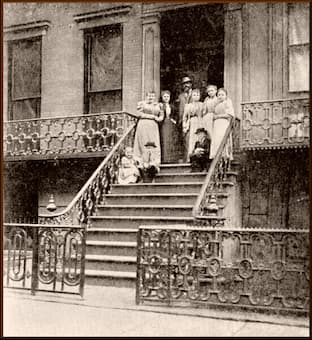 Antonín Dvořák and his family in New York

One of the most famous and popular Humoresques ever composed comes from the pen of Antonín Dvořák. In fact, he wrote an entire piano cycle titled Humoresque, but the seventh piece in the series is “probably the most famous small piano work ever written after Beethoven’s Für Elise.” Composed during his stay in America in the summer of 1894, Humoresque No. 7 quickly achieved the status of a traditional folk song. Apparently, the melody was fitted to a series of humorous verses involving passenger train toilets. If you’d like to sing along, the beginning reads, “Passengers will please refrain from flushing toilets while the train is standing still within the stationhouse.” Publisher immediately took advantage of the great popularity of this “Humoresque” and produced copious arrangements for various instruments and ensembles. 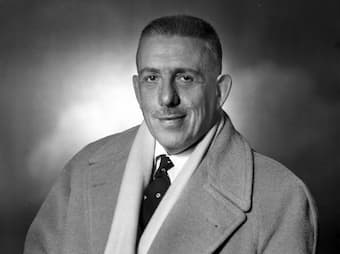 Francis Poulenc composed his Humoresque in 1934, and dedicated the piece to the pianist Walter Gieseking. The French-born German pianist was known for his nuanced performances of the music of Debussy and Ravel. Supposedly, he had a stupendous ability for memory and was able to master unfamiliar repertoire with little practice. It is said that he memorized new works while traveling by train, ship or plane. According to some sources, “he could learn an entire concerto by heart in a single day.” Gieseking performed much of the standard piano repertoire, but he also played works by Hindemith, Schoenberg, Pfitzner, and premiers of Poulenc. 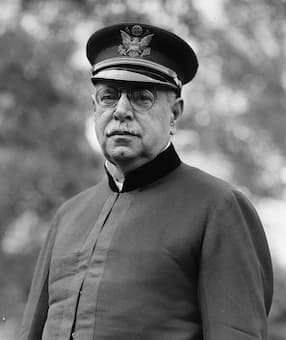 John Philip Sousa is known as the “American March King.” By all accounts, he had a wicked sense of humor and he did compose a Humoresque with the fanciful subtitle “A Mingling of the Wets and the Drys.” That title refers to a US law that forbade the manufacture, transportation, and sale of alcoholic beverage between 1920 and 1933. Although the act of drinking alcohol remained legal, that law ushered in the era of Prohibition. During this time, Sousa, “who often enjoyed a drink or two, could not resist leading his band in a medley of well-known drinking songs.” 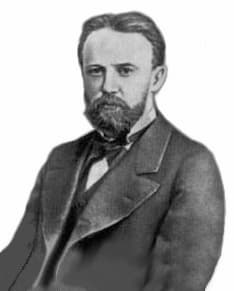 Tchaikovsky composed his “Humoresque” as the second of the Two Pieces Op. 10 in 1871/72. It was originally written for solo piano and features a joyful and simple-hearted dance. Much of its charm and humor derives from repeated notes in the middle voice. “The contrasting middle section is loosely based on a French folk song ‘La fille aux oranges,’ which Tchaikovsky heard in Nice just before he started to write the piece.” At the request from Nadezhda von Meck in December 1876, Tchaikovsky arranged his Humoresque for violin and piano. 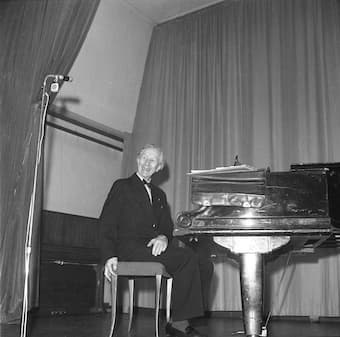 The Norwegian composer Harald Sæverud (1897-1992) explained, “all my music has grown out of a vague and supernatural sound. As a fourteen-year-old boy I heard the invisible fluttering of owls’ wings in the summer night. This made the starting-point for all my music.” As a composer, Sæverud did not paint pictures of Norwegian mountains and fjords, but “focused on fragments of nature and human mood; he describes ancient legends and myths or tales from valleys and islands.” He studied in Berlin and Paris, and the English conductor Sir John Barbirolli wrote, “whether you like the music of Sæverud or not there is no mistaking who wrote it, and this can be said of few composers of the present day.” His Humoresque is essentially cheerful, but as in most of his works, there is a somber underlying quality. 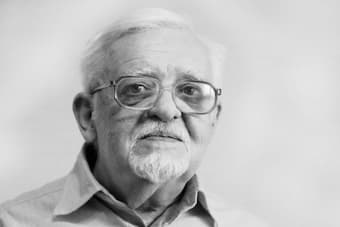 Nicolai Kapustin (1937-2020) composed his Humoresque Op. 75 in 1994. It is widely considered one of his most difficult pieces to perform. Apparently it was influenced by the playing style of jazz legend McCoy Tyner. “Kapustin had shifted from scoring out jazz pieces to composing virtuoso recital repertoire in which the jazz elements have become an integral element of the core DNA.” Individual strains and variations sound like improvisations, but they are minutely through composed and notated.

William Henry Squire (1871-1963) was considered Britain’s leading cellist between the late 1890s and the late 1920s. He studied cello with Edward Howell at the Royal College of Music in London, and he took composition classes with Hubert Parry and Charles Stanford. In all, he made some 200 recordings and played “with an all too scarce nobility of tone.” Squire primarily wrote for the cello, and in his miniatures “he shows himself to be a master of emotional gestures.” His Humoresque remained in the repertoire, and his considerable influence was largely due to his extended teaching and recording activities. 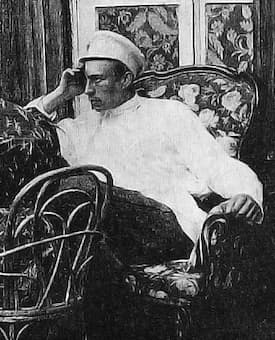 Sergei Rachmaninoff completed his set of seven Morceaux de salon, Opus 10 in 1894. He had recently graduated from the Moscow Conservatory, and these beautiful miniatures “display a simple, often Chopinesque style of romanticism while bearing the unmistakable Russian flavor the composer captured in all his work.” The “Humoresque” was revised in 1940, together with a number of other early piano pieces, to correct some engraving errors. If you listen carefully you might hears shades of the First Symphony, and an element of caprice suggested in the title. 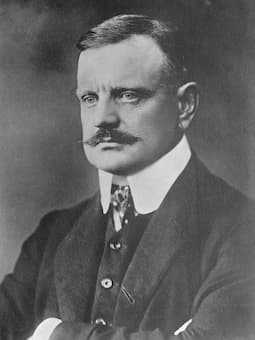 Between 1916 and 1917 Jean Sibelius (1865-1957) composed a total of six Humoresques for violin and orchestra. Originally, he had intended for these pieces to comprise an entire Suite, but due to a printing error they received different opus numbers. The composer considered these works “well suited for the violin and rewarding to play.” The first performance, however, only took place on 24 November 1919 with Paul Cherkassky as the soloist. Critics complained, “the orchestra came close to drowning out the soloist,” and apparently they did not notice that “many features look forward to the Dorian atmosphere of the 6th symphony.” Sibelius revised his Humoresques into their final versions in 1940. 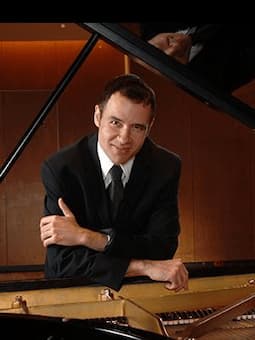 The Humoresque continues to attract composers, including Christos Tsitsaros. Born in Cyprus, he won first prize in the National Competition of the Conservatory of Athens at the age of 13. He continued his studies in Warsaw, and after winning the Gina Bachauer Competition relocated to Paris and graduated from the Ecole Normale de Musique. He is currently Professor of Piano Pedagogy at the University of Illinois in Urbana-Champaign. Tsitsaros is an active composer publishing with Hal Leonard Corporation. Besides composing concert works he writes pedagogical pieces that have been used in various examination systems. Critics describe him as “a strong and eloquent voice in the contemporary world of piano music,” and I would have loved to practice and perform his Sonatina Humoresque during my early years of piano studies.