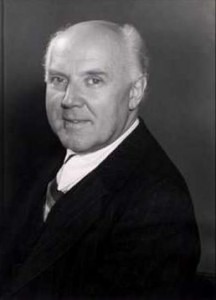 Walter Gieseking (1895-1956) had a family that travelled frequently and so his first performances at the piano were without formal training. It wasn’t until 1911 that he was able to start formal study at the Hanover Conservatory. His budding career was cut short by the First World War when he was conscripted in 1916 to serve as a regimental bandsman. It was his first London recital in 1923 that saw the beginning of his reputation as a pianist.

Because he stayed in Germany during WWII, he was accosted of having collaborated with the Nazis and so was blacklisted after the war until he was cleared of all charges in 1947. Nonetheless, his international career did not include performances in the US until 1953.

He was noted for his natural technique, his perfect pitch, and, above all, a skill for memorization, and so he mastered a bewilderingly large repertoire, often with little study. His performance repertoire was very broad, covering Beethoven through Schoenberg.

His 1944 recording of Beethoven’s Emperor Piano Concerto with the Großes Berliner Rundfunkorchester under Arthur Rother, comes with additional sound effects. During his cadenza (around 2’30”) and in some of the quieter sections (around 5’40”) the source of extra noise comes from the anti-aircraft guns stationed outside the recording studio. This famous ‘air-raid’ recording speaks to the conditions that faced music performance in a time and place of war.

It is his Mozart recordings and his recordings of Debussy and Ravel for which Gieseking is largely remembered today and he brings an artistic sensibility to their performance that often breaks though others’ more ephemeral performances.

Ravel: Pavane pour une infante défunte (Walter Gieseking, piano)
In addition to his performing, he also had a small career as a composer and his music, although interesting, does not capture the attention as much as his own performances did.

Gieseking: Quintet for Piano and Winds: I. Allegro moderato (Alexandre Gattet, oboe ; Nicolas Baldeyrou, clarinet ; Antoine Dreyfuss, horn ; Julien Hardy, bassoon ; Laurent Wagschal, piano)
His last recording was of the first three movements of Beethoven’s Piano Sonata No. 15 for HMV. The day he was to record the final movement he was hospitalized and died three days later.