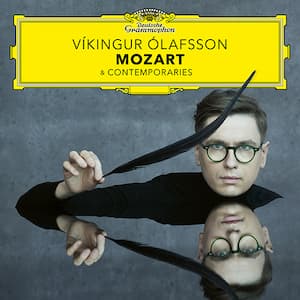 First taught by his mother, Icelandic pianist Víkingur Ólafsson studied at the Julliard School under Jerome Lowenthal and Robert McDonald. The unique persona and creative genius of the pianist account for his recent rise to fame. Currently one of the most sought-after pianists of his generation, Ólafsson is the recipient of multiple prestigious awards, including the Opus Klassik Award for Solo Recording (Piano) and BBC Music Magazine Award.

Ólafsson is known for his originality in programming, and this album is no exception. The album, entitled Mozart & Contemporaries, presents an enticing collection of keyboard works by Mozart, C.P.E. Bach, Haydn, Galuppi and Cimarosa. In the liner notes written by the pianist himself, these composers embody “different aesthetic values that coexisted” in that era. By juxtaposing their works, Ólafsson wishes to convey the “prevailing ideas, styles and tastes of the times” to the listeners. And he does. 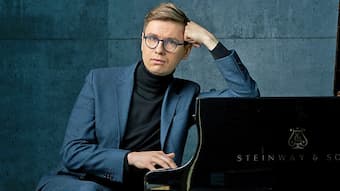 He’s by no means a conformist, with his interpretive choices daring yet tasteful. Not satisfied with how the unfinished Fantasia in D minor by Mozart is often “completed” posthumously, he replaces the ending with Mozart’s Rondo in D major. He doesn’t play all of the repeats and only performs the ones he feels appropriate. Notice how he completely shifts the character by altering the articulation and phrasing in the repeat in the first movement of Mozart “Sonata facile” in C major, K.545.


At the same time, there is, of course, no lack of technical prowess, in the form of scintillating runs in Mozart’s Rondo in D, exceptionally clean passagework in C.P.E. Bach’s Rondo II and dexterity in Haydn’s Piano Sonata in B minor. There is alluring transparency in tone, variety in colours and refined layering of touch, while phrases are always crafted with delicacy. Mozart’s Kleine Gigue in G, which is thought to be a tribute to J.S. Bach, receives a lucid reading from the pianist with clarity in its contrapuntal texture and playfulness.


Meanwhile, the sonatas by the two more distant composers are equally convincing, such as the deeply introspective Sonata No.42 in D minor by Domenico Cimarosa and the apprehension in Baldassare Galuppi’s Andante spiritoso from Sonata No.9 in F minor.


However, what strikes me the most is the emotional depth Ólafsson brings to the music. His own arrangement of Adagio ma non troppo from Mozart String Quintet in G minor is such a gem. What a sublime, heartfelt and sincere performance, which finely captures the sorrow, fear and bittersweetness of the original work.


The album is concluded with Liszt’s transcription of the transcendental Ave verum corpus by Mozart. The simplicity, serenity and purity of Ólafsson’s playing, coupled with his exquisite voicing, render the music simply otherworldly…


What I find particularly impressive in this recording is his thoughtfulness in the selection of pieces and the refreshing outlook he gives to the music, which perfectly exemplifies his interpretive maturity and innovative approach to music. We indeed have no lack of precocious talents with “flawless” technique. But what we need in today’s world of classical music are real artists with individuality and musicality – Víkingur Ólafsson is clearly one of them.

This album was released by Deutsche Grammophon on 3 September.