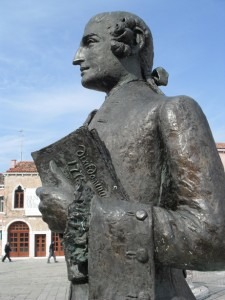 Baldassare Galuppi (18 October 1706 – 3 January 1785) was an Italian composer, nicknamed “Il Buranello” because of his origin on the island of Burano, near the city of Venice. He was regarded as one of the most fecund and influential composers of his generation, and was most renowned for his operas, particularly opera buffa.

He composed more than a hundred operatic works, numerous cantatas, oratorios, Masses and Vesper psalms, much chamber music, and about 125 keyboard works.

Though his first attempt at opera, La fede nell’incostanza ossia gli amici rivali (1722), was a spectacular failure, Galuppi moved on to study music with Antonio Lotti, and after a brief period in Florence working as a harpsichordist, he returned to Venice for another attempt at opera. This time, his opera seria Dorinda (1729) was a success and launched his theatrical career.

In 1740, Galuppi was appointed music director at an orphanage, the Ospedale dei Mendicanti. He worked at St. Mark’s Basilica in Venice from 1748, being appointed maestro di cappella (considered Venice’s top musical post) in 1762. He lived and worked for most of his life in Venice, though from 1741 to 1743 he was in London, and from 1765 to 1768 he worked for Catherine the Great in St. Petersburg.

His first opera buffa was L’Arcadia in Brenta (1749). This was also his first collaboration with librettist Carlo Goldoni, with whom he produced a number of operas. These works were very popular, with Il filosofo di campagna (1754) a particular success. Goldoni’s libretto Il mondo della luna, first set by Galuppi, was later used by a number of other composers, including Joseph Haydn and Giovanni Paisiello. Subsequent operas include L’amante di tutte (1760) and I tre amanti ridicoli (1761), written on libretti by the composer’s son Antonio Galuppi, who wrote under the name “A. Liteo”.

The composer’s operatic output decreased somewhat in his later years. Among his non-operatic works are a large number of pieces for harpsichord, and several oratorios. By the time of his death, in Venice, Galuppi was one of the best-known and most respected figures in the Venetian musical establishment. A requiem mass was held in his memory at St. Mark’s Basilica. His pupil, Andrea Adolfati, was also a successful opera seria composer. At least two sacred choral works by Antonio Vivaldi have been attributed to Galuppi, a Beatus Vir and a Nisi Dominus; musicologist Janice Stockigt believes that a Dixit Dominus might be another such work.

Galuppi: Concerto a quatro No. 2