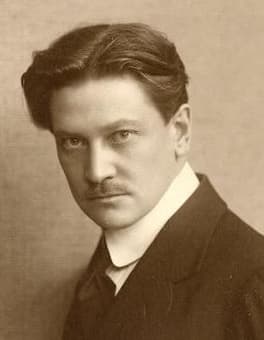 Finnish composer Selim Palmgren (1878-1951) was a prolific composer for the piano, writing some 300 small piano works, 5 piano concertos, choral works and one opera (another opera was never completed). Although in his 1948 biography, Minusta tuli muusikko (I became a musician), he said that his music had spanned the world, being performed in places as distant from Finland as ‘Florida, Java, and even as far as Ceylon’, he no longer figures in the international repertoire.

His studies started at the Helsinki Music Institute before he went on to further study in Germany and Italy with Conrad Ansorge, Wilhelm Berger, and Ferruccio Busoni. His first position upon his return to Finland was as a conductor of the Helsinki University Chorus (1902–4 and 1927–8). From 1909 to 1912, he was the orchestral conductor of the Turku Musical Society, serving the Society also as composer and pianist. His several European tours were undertaken sometimes with his wife, the singer Maikki Jändefelt. After a 1920–21 tour of the US, he was invited to teach composition at the Eastman School of Music where he stayed for 5 years (1922—26). From 1936 to 1951 he taught harmony and composition at the Sibelius Academy in Helsinki. 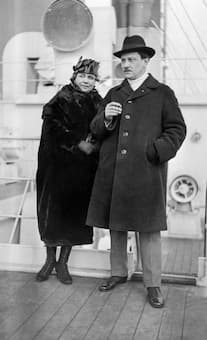 Selim Palmgren and his first wife, the singer Maikki Järnefelt-Palmgren, on a ship to New York in 1921 (photo by Arthur Coit)

His five piano concertos were widely performed by some of the great pianists of the time, including Ignaz Friedman, Myra Hess, Wilhelm Backhaus, and Benno Moiseiwitsch. His contemporaries called him the ‘Chopin of the North’ (Pohjolan Chopiniksi) and his work owes a great deal to Debussy and musical impressionism.

In an interview in New York in 1921, he summed up his position in European music: ‘I’m interested in all folk music because I have used quite a good deal of that of my own country, though my work is less characteristic of the real Finnish music than that of Sibelius. They told me in Paris when I was there recently that the French conductors found Sibelius’s orchestral works difficult to conduct but that mine was easier. I suppose that means that my music is less local in character.’ He rose above the nationalism that came to define so much music of the late 19th century. Even after he left his studies, he continued to rely on Busoni as a touchstone – Busoni looked at his work in process and also helped him find a publisher.

More than style, however, writers were impressed with his ‘real understanding’ of the piano and his skill in ‘suggesting definite and widely contrasted moods and an agreeably proportionate mixture of melodic, harmonic and rhythmic invention’. Palmgren’s piano work tetters between late Romanticism and impressionism, moving forward to tentative approaches to modernism. These experiments were not looked on with approval in an increasingly nationalist-focused Finland.

A work such as Havet (The Sea) from his 24 Preludes set is indicative. With a tempo indication of Allegro feroce, it grabs you from the first note. This isn’t a calm sea of sun-reflective waves, this is crashing and foaming and beating on the rocks of the shore.


As contrast, Fågelsång (Bird Song) is bright and joyous. We’re not only sitting in the trees and singing but flying from one to the other, spreading the news from limb to limb, tree to tree, forest to forest.


In I folkton (In Folk Style), Palmgren captures a unique side of Finnish song – lyrical and melancholic at the same time.


In the final work of the Preludes, he adopts a martial style to convey Kriget (The War).


These little pieces, all less than 3 minutes and some not even a minute long, portray life from its beginnings (No. 9. Vaggvisa “Cradle Song”) through dreams (No. 11. Drömbild “Dream Picture”), dances (waltzes, sarabandes, and round dances) to death (No. 20. In memoriam: Lugubre).

As early 20th-century miniatures by a master at the keyboard, there is little that approaches the small and perfect beauty of these works.