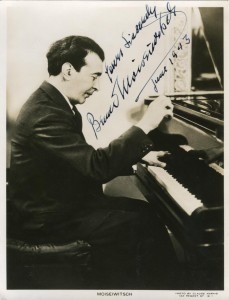 Benno Moiseiwitsch (1890-1963) was another of the great pianists who came onto the international stage in the 1930s and who brought an elegance of performance matched with a relaxed virtuosic style.

Born in Odessa, Moiseiwitsch started his training at age 7 at the Odessa Music Academy before continuing in Vienna with Theodor Leschetizky when he was 14. At age 16, he went to join his family in England, making his London debut in 1909. His touring career took him to the US, Australia, India, Japan, and South America before he settled in England in 1937, taking out British citizenship. In recognition of his public service during WWII, when he played hundreds of recitals for servicemen and for charities, he was awarded the CBE in 1947.

Chopin: Piano Sonata No. 3 in B Minor, Op. 58: II. Scherzo (Benno Moiseiwitsch, Amipico recording piano)
His repertoire included not only the classical standards such as Beethoven but also more modern composers such as Delius and Ravel. It was Rachmaninov, however, for which he held the greatest reputation. Moiseiwitsch was filmed as part of the Battle for Music (1943), where he’s performing Rachmaninov’s Second Piano Concerto with the London Philharmonic, Constant Lambert conducting.

Rachmaninov and Moiseiwitsch met in the US in 1919, when Moiseiwitsch was there on a concert tour and they remained friends until Rachmaninov’s death in 1943. It was Rachmaninov himself who declared that Moiseiwitsch played some of his works, including the second piano concerto, better than he did himself, calling him his ‘spiritual heir.’ On the other hand, when interviewed in 1958, Moiseiwitsch referred to Rachmaninov as ‘a great friend whom I admired more than anyone as a man, as a composer and as a pianist. He had impeccable technique, taste, artistry and a wonderful personality, and if I listen to his playing it will bring back very happy moments that we used to spend together’.