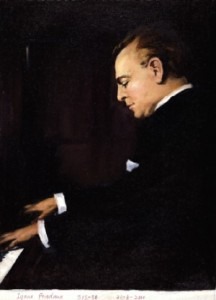 The Polish pianist Ignaz Friedman (1882-1948) was considered not just the one of the top but one of the supreme piano virtuosos of his time. As were so many of his contemporaries, he was a child prodigy and he left his home in Krakow, Poland, to study at the Leipzig Conservatory. Just a year later, he left Leipzig to study with Theodore Leschetizky in Vienna. He made his official debut in Vienna in 1904, starting with an over-the-top programme of not one but three piano concertos: Brahms’s Concerto in D minor, Tchaikovsky’s First Concerto and Liszt’s E flat major Concerto. He began touring in 1904 and didn’t stop for the next 40 years.

He centred his activities in Berlin until WWI and thereafter he was based in Copenhagen. With the onset of WWII, he had to leave Scandinavia and a fortuitous invitation from the Australian Broadcasting Commission took him far away from Europe. He remained in Australia until his death in 1948.

He was most famous for his interpretations of Chopin, but, according to one researcher, his famous recordings of the mazurkas for Columbia were fraught with problems. Each of the dozen mazurkas were recorded multiple times – one of them nine times – before they were approved by the pianist for release. And, even if the pianist approved it, it then had to have the engineers’ approval and they turned down their share of the recordings on simple technical grounds.

His performance style was known for its quiet and effortless effect. Critics commented on his ‘amazing rapidity in passage of real difficulty and complexity’ and most of this was due to his essential technical skills. Some quibbled with what they saw as his showmanship and this led to some unenthusiastic reviews late in life as public taste changed from the pianist being the centre of a performance to the composer’s work being the focus.

Nonetheless, he brought the Romantic taste for interpretation to the world and through his legendary Chopin interpretations, taught us to think of this composer in a new way.