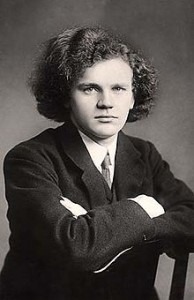 German-born pianist Wilhelm Backhaus (1884–1969) started studying the piano at age 4 with his mother and by 1891, was studying at the Leipzig Conservatory. His private study with Eugen d’Albert in Frankfort, a student of Franz Liszt, was crowned by being present at a concert where d’Albert performed Brahms’ two piano concertos conducted by Brahms.

Backhaus’ touring career started at age 16 with his first major tour in 1900. In 1905 he won the Rubinstein Prize with Béla Bartók taking second place. He toured for the next 62 years, playing his last concert in New York at age 78.

He was known for his interpretations of Beethoven and Romantic composers such as Brahms and Chopin.

Beethoven: Piano Concerto No. 1 in C Major, Op. 15: III. Rondo: Allegro scherzando (Wilhelm Backhaus, piano; Vienna Philharmonic Orchestra; Hans Schmidt-Isserstedt, cond.)
He is considered one of the first modern keyboard artists, most notably because his faithfulness to the composers’ music. He was also one of the first pianists to leave us with a substantial body of recording. He was the first to record Chopin’s etudes in 1928; he also recorded some of them when he was in his 70s, in the 1950s.

In these Opus 10 recordings, his fluidity of style and technical abilities come to the fore. The technical and musical challenges of the music seemingly pass without posing a challenge. He balanced an analytical approach with a clean and objective style that conveyed the feeling of the music.

He recognized the importance of recordings and in 1909 made an abridged recording of Grieg’s Piano Concerto, reducing the 28-minute work to about 6 minutes, which was not only the first recording of the concerto but also the first concerto to be put on record.

In its obituary for the pianist, The Times told one story of his phenomenal transposing powers: finding the piano a semitone too low at a rehearsal of Grieg’s A minor Concerto, he simply played in B flat minor — and then in A minor at the concert, after the instrument had been correctly tuned. Such were the powers of the classically trained pianists of the Leipzig Conservator.