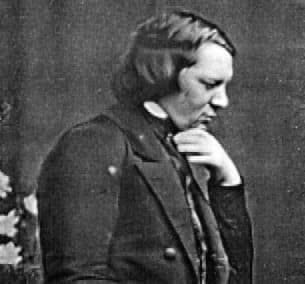 On 24 October 1850, Robert Schumann took up his post as municipal music director in Düsseldorf. Although he complained about the amount of work and the occasional squabble with the administration, he felt happy and content. After roughly 2 years, however, “an agonizing state of nervous overstimulation took hold of him, and he suffered from delusions, was pursued by voices and tones, and finally a fit of overwhelming anxiety.” Schumann left his home and jumped off the Rhine Bridge into the river. He was rescued and brought home, but his mental state did not recover. As such, Schumann himself asked to be taken to a mental institution, and he was admitted to the private sanatorium of Dr. Franz Richarz in Endenich near Bonn in March 1854. The private asylum “was one of the more progressive institutions of its type, and Dr. Richarz adhered to the ‘no-restraint’ method championed by the British physician John Conolly.” Although he neither force-fed nor drugged his patients, Richarz discouraged “direct contact with relatives in the belief that such meetings might set off untoward reversals.” As a result, Clara did not see her husband until nearly two and a half years into his confinement, and just two days before his death. 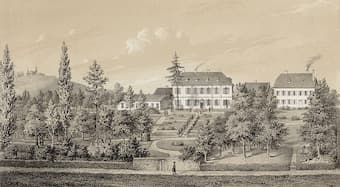 The private psychiatric hospital in Endenich, 1860

While Schumann was severely psychotic when he was admitted to Endenich, his condition improved rapidly in the following months. “He conversed mildly and friendly with his visiting friends Brahms and Joachim; he made music, read, wrote letters and composed.” He writes to Clara on 18 September 1854, “Beloved Clara! What good news have you sent me again, that heaven gave you a magnificent boy. (Clara had given birth to a son named Felix, after Mendelssohn)… It makes me very happy that the cello concerto, the violin fantasy, which Joachim played so wonderfully, and the fugues have been published… If you write to Joachim, say hello to him. What did Brahms and Joachim compose? Has the overture to Hamlet (by Joachim) been published, has he completed any other? You write to me that you give lessons in the piano room. Who are the current students, which are the best?” And on 27 November 1854, he writes to Brahms, “Dear! I wish I could see you myself and hear your wonderful variations, or from my Clara, about whose wonderful performance Joachim wrote to me. How the whole work rounds off so uniquely, as one knows in the richest, fantastic splendor and again in deep art, as I did not know, connected, the theme popping up here and there and very secretly, then so passionately and intimately… Just write soon to your adoring and loving one R Schumann.” 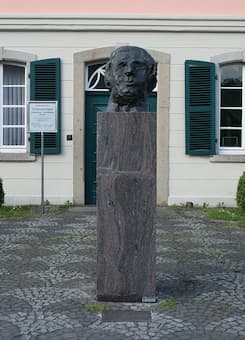 Bust of Robert Schumann in front of Schumannhaus
in Bonn, Germany

Dr. Richarz kept a logbook or diary, recording the activities of his famous patient. “When his health permitted, Schumann strolled into Bonn to view the Beethoven monument, played the Lipp piano in the room adjoining his own, wrote letters and received friends including Joachim, Brahms, Wasielewski and Bettina von Arnim, née Brentano.” Visitors were only permitted to communicate with Schumann through an aperture in the wall of his room. “During his more lucid moments he even managed to undertake a few compositional projects: the Paganini harmonizations begun in Düsseldorf in 1855, a keyboard fugue in January 1856, a piano reduction of Joachim’s overture Heinrich IV, and a harmonization of the chorale “Wenn mein Stündlein vorhanden ist.” According to Dr. Richarz, Schumann might well have composed a number of works, but in April 1856 he “burned them together with other papers and letters.” Dr. Richarz also reports that Schumann “has been jotting down all sorts of things, many of them melancholy in content.” One such entry reads, “In 1832, I contracted syphilis and was cured with arsenic.” For a good number of commentators, Schumann’s syphilis infection relates to the probable cause of the composer’s final illness. Medical experts contend, that the “hallucination and auditory disturbances he experienced in February 1854 probably mark the onset of the final stage of the disease after a long period of latency.” 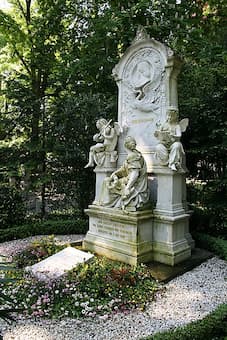 Grave of Robert Schumann and Clara Schumann
in Bonn, Germany

In 1856, Schumann got progressively worse and suffered from “convulsive fits, the gradual loss of the ability to speak clearly, aggressive behavior and protracted periods of screaming.” He was also convinced that he was being poisoned. Clara was basically kept in the dark as to the exact severity of her husband’s dementia, but when she learned from Brahms in June 1856 that Schumann had not left his bed for several weeks, she investigated for herself. She was twice prevented from seeing Schumann, but was finally admitted to his room on 27 July. “Now in the throes of pneumonia and barely conscious, Schumann mustered the strength to embrace her and mumble a few words of recognition.” At 4 in the afternoon on 29 July, Schumann died quietly and alone. His funeral was arranged two days later in the cemetery near the Sternentor in Bonn. Brahms, Joachim, Dietrich, Wasielewski and Hiller attended the simple service. According to the poet Klaus Groth, the small cortège attracted a crowd of onlookers, who came “flooding from every street and lane as if to watch a prince pass by.” The composer and friend Ferdinand Hiller said in his eulogy, “Your weary spirit! You asked too much from it. What may be granted to those who gratefully receive in a sacred hour, you demanded as a right at every moment. For a long time your spirit obeyed willingly, and who can say how he fell out with you? Oh, maybe it was just a quick sulk like best friends do, and only to our silly eyes did it seem like a rift. But you are back on good terms now, and smiling at everything we’re saying about you, and gently smiling, in hope that we may be forgiven.”