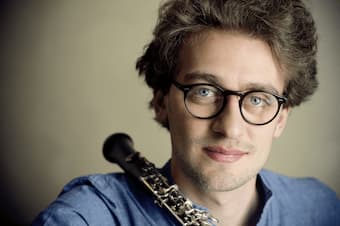 We were speaking the other day with oboist Gabriel Pidoux, whose new album Romance was released in February 2022, about the oboe repertoire. He said that there was a great flowering of material in the Baroque, after the oboe / hautbois made its first appearance in the mid–17th century, but then, with the advent of that even newer instrument, the clarinet, and the difficulties of playing the oboe, it sort of fell off the radar.

In the Classical period, Mozart wrote oboe concertos, as did Haydn and Beethoven, although many are no longer full extant today, but it really wasn’t until the innovations of the key system begun by Boehm for the flute, which was then translated by the Triébert family in Paris to the oboe that the instrument started to come back. At the height of its development in the 19th century, new key systems were coming in every decade; this has settled down by now! French composers took up the oboe and the repertoire began to expand again with contributions by Saint-Saëns, Poulenc and other. 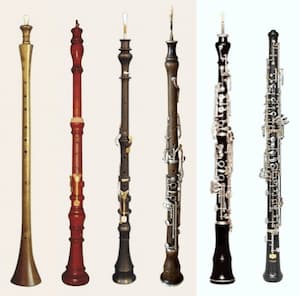 The modern oboe isn’t always used for historical recordings and Gabriel spoke about working on a Mendelssohn project that needed a Mendelssohn-era oboe – he finally found one at auction and bought it and restored it. Some parts were no longer available, like the ivory ring that was originally around the bell of the instrument. At some point in time, the bell had cracked, and the ring had vanished. As ivory is no longer available, a new ring was made, after careful measurement, on a 3-D printer. The older instruments have their own sound, and also their own problems with performance with the older key systems.

We talked about reed-making, which for an oboist can be an all-engrossing and time-consuming task. Gabriel owns 11 oboes, coming from various points in the instrument’s development, and he said he’s had to make 11 different kinds of reeds for them – each has a different staple, uses a different part of the reed, etc. He’s currently planning his own reed-room so he can make them more easily, micrometer at the ready. He said he thought it was one reason that teenage oboists gave up the instrument – reed making is important to your sound and if you can’t spend the time, your potential as an oboist will be limited. 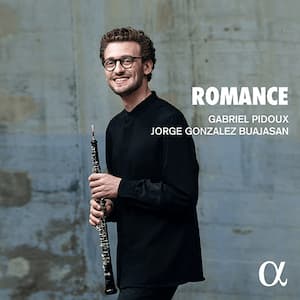 His new album, Romance, starts and ends with Schumann – Robert to open and Clara to close. Robert Schumann’s 3 Romances, op. 94, were written in 1849 for presentation to Clara. Although written for oboe, Robert only heard a performance on violin before his death, with Clara on the piano. The first oboe performance wasn’t until 1863, 7 years after Robert’s death. Gabriel noted that the work is extremely difficult to play on the oboe of Schumann’s time – today, however, with the improvements made in the oboe key system, the work has entered the standard oboe repertoire and is considered one of the best works of the Romantic period for the instrument.


The recording closes with Clara Schumann’s 3 Romanzen, Op. 22. Written in 1853 for violin and piano, they have been transcribed by Gabriel for oboe and piano.


The change of instrument from violin to oboe is not an uncommon one, but there is a tremendous difference in the performance. The violin doesn’t capture the same legato, singing tone that seems to be inherent in the oboe. The opening Andante, with its flowing lines that occasionally stop and catch, seem to be ideal for the woodwind.

Between the Schumanns’ romances are three very different works: Elgar’s Salut d’amour, Op. 12, written in 1888 for violin and piano and here arranged by Gabriel for oboe and piano. Written as an engagement present to his fiancé, Caroline Alice Roberts, the work has become a favourite, both as a chamber work and for soloist (violin, oboe, or cello) and small orchestra. It also had words set to it as Woo Thou, Sweet Music and has become one of Elgar’s best-known works.

The album is filled out with 3 piéces dans le style romantique by Leopold Wallner and Poéme by Marina Dranishnikova, a work that Gabriel discovered during a competition when it was assigned as a required piece.

It’s a beautiful album, full of things that are familiar and that are new – all of which will give you a new appreciation for an often-over-looked instrument.

Hear Gabriel Pidoux in Hong Kong in June where he’ll be having a recital of the music from his new album with local pianist Colleen Lee on 21 June and will appear on 23 June playing the Vaughan Williams Oboe Concerto with the Hong Kong Sinfonietta.